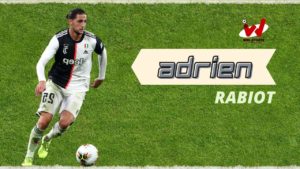 Adrien Rabiot is a French Professional Football player who plays for the Serie A club Juventus and the French National team. He plays the position of a central midfielder.

Adrien was born on 3rd April 1995 in Saint Maurice, France. His father was an avid fan of football. Consequently, his son became actively involved in the sport. At the age of 6, Adrien began playing football competitively at the Creteil’s Youth Academy. He trained for 6 years. His skills landed him in Manchester City for a few months.

In 2012, Adrien signed his first contract agreeing to a three-year deal with Paris Saint Germaine. He played for the senior team and made his debut on 26th August in a penalty shootout at the Ligue 1. In the same year, he made his UEFA Champions League debut and led his team to victory against Dinamo Zagreb. In 2013, Rabiot played for the France U19 and qualified for the finals of the UEFA European Under-19 championship.

The team ended up losing the match against Serbia. In 2014, he was loaned to Toulouse and scored his first professional goal at Brest. After returning to PSG, Rabiot made appearances in 46 matches and scored six goals. In 2015, Rabiot scored his first goal in European competition and won the game against Chelsea. In 2016, his team played in the finals of the Coupe de la League and won over Lille. In the same year, Rabiot debuted for France’s senior team in a match against Ivory Coast. In 2018, he was reserved for the FIFA World Cup squad but refused to be put on the list.

In 2019, Rabiot was suspended by PSG for a month. In 2019, Rabiot signed a deal with Italian Serie A champions Juventus. He made his team debut on 24th August. He 2020, he scored his first goal for the team in Serie A against Milan. In 2021, Rabiot scored his first Champions League goal and won the game against FC Porto in the UEFA Champions League. On 18th May, Rabiot was called to the France 26-man squad for UEFA 2020. He played a game against Portugal but lost the game in a penalty shootout.

His zodiac sign is Aries. Rabiot’s estimated net worth is $10 million.

Some Important Facts About Adrien Rabiot

If you have Some more Important details about Football Player Adrien Rabiot, Please comment below we will be updated soon.