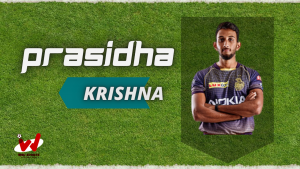 Prasidh Krishna is an unusual bowler, who plays for the Karnataka Cricket team in domestic cricket and Kolkata knight riders in the Indian premier league. He is a right-arm fast bowler who has given some exceptional performances in his career.

He made his List A debut in 2016 for Karnataka in Vijay Hazare Trophy. In 2015 he made his first class debut for Karnataka while the team was missing the lead players in the team.

Prasidh Krishna was born on 19 February, 1996 in Bengaluru, Karnataka, India. His craze for cricket started as a child when he was in school, he joined the sports team and started playing under guidance of Srinivas Murthy at Carmel School in Padmanabhanagar. He further told in an interview that he is a sports buff to be exact, he loves every sport since the starting.

He made his first class debut in 2015 for Karnataka, in Ranji trophy.

He was the lead wicket-taker in Vijay Hazare Trophy in 2018-19 for Karnataka, with thirteen dismissals in seven matches. He flashed in all the headlines when he performed exceptionally in his match against Bangladesh A in List A cricket.

He was roped in by Kolkata knight riders and he made his Indian premier league debut for them.

He was selected for Indian A squad for 2018 ACC Emerging Teams Asia Cup.

Prasidh always admired sports, he never liked studying. Since he was always drawn towards sports, he started playing cricket for his school sports team.

Some Important Facts About Prasidh Krishna.

If you have Some more Important details about cricketer Prasidh Krishna. Please comment below we will be updated soon.