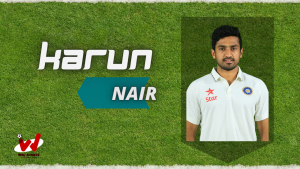 Karun Nair is an impressive Indian batsman, who plays for the Karnataka Cricket team in domestic cricket and Kolkata knight riders in the Indian premier league. He has performed amazingly in all the years as a batsman.

In his debut first-class match he played so exceptionally well that the Karnataka Cricket team won the Ranji trophy. He made his test debut in 2016, in which he displayed fantastic batting skills.

Karun Nair was born on 6 December 1991 in Jodhpur, Rajasthan, India. As he was an premature baby, his father was advised to introduce him to sports to improve his lung weakness. He joined Koramangala Cricket Academy on March 28, 2001 at the age of eleven years. He was coached under Shivanand.

Karun made his ODI debut on June 11, 2016, against Zimbabwe in Harare cricket club. In the same year, he made his test debut on 26 November 2016 against England. He scored a maiden century in the last match of the series at M. A. Chidambaram Stadium. He scored a triple century in three innings becoming the quickest batsman to do so in history. He was the second Indian cricketer to do so and the third player after Bob Simpson and Sir Garfield Sobers to shift their maiden into the triple century.

Karun Nair’s father is a mechanical engineer and businessman, his mother is teacher. He was born in Jodhpur and brought up in Bangalore but his family belongs from Kerala.

Some Important Facts About Karun Nair

If you have Some more Important details about cricketer Karun Nair, please comment below we will be updated soon.