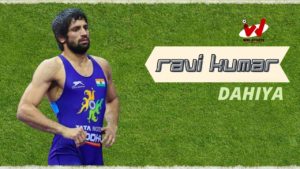 Ravi Kumar Dahiya is a freestyle wrestler hailing from Haryana, India. Currently, he is representing the country in the 57 kg at Tokyo Olympic 2020. He is one of the promising wrestlers of India, he is marching ahead with his determination and confidence. His dedication towards his game and the spirit of never giving up has given him a lot at such a young age.

Ravi Kumar Dahiya was born on 12th December 1997, in a small village located in Sonipat, Haryana. He comes from low-class family background. His father Rakesh Dahiya is a farmer who works in ranted paddy fields. Since the age of 10 Ravi Kumar has been learning wrestling from Satpal Singh at the Chhatrasal Stadium in North Delhi, his father used to travel daily Nahri to North Delhi for giving fruits and milk to his son Ravi Kumar.

From the area where Ravi Dahiya comes, legendary wrestlers like Phogat sisters, Bajrang Punia, Yogeshwar Dutt also come from there. Ravi Dahiya also wanted to do wrestling, but the financial condition of his family was not so good. Despite this, the family members of Ravi Dahiya fully supported him in becoming a wrestler.

His career achievements start from the 2015 Junior World Wrestling Championships in Salvador de Bahia, In this event, He won the bronze medal in the 55 kg freestyle wrestling category. In 2017, Ravi Kumar performed brilliantly at the Senior Nationals Games and reached the semi-finals, but due to injury, he had to be out.

In the year 2018, Ravi Kumar made a tremendous comeback and won the silver medal in the World U23 Wrestling Championship held in Bucharest. This was the only medal for India in that championship in the 57 kg category.

In 2019, Representing the title-winning team, Haryana Hammers, he remained unbeaten in Pro Wrestling League. In the same year, He was lost the bronze medal match in Asian Wrestling Championships held in Xi’an, after that his rake was 5th.

He debuts in the world championship in 2019. After defeating European champion Arsen Harutyunyan in the round of 16 and the 2017 world champion Yuki Takahashi in the quarterfinal, He booked his place in one of the 6 players quotas for the Tokyo Olympics 2020. In the semi-final round, he lost the match to defending champion and eventual gold medalist Zour Uguev and took the bronze medal. This medal got him included in the Ministry of Youth Affairs and Sports’ Target Olympic Podium Scheme.

In 2020, Ravi won the gold medal at the Asian Wrestling Championships held in New Delhi.

Indian Ravi Kumar Dahiya and Deepak Poonia have reached the semi-finals in both 57kg and 83kg men’s wrestler’s category at the Tokyo Olympics 2020, Dahiya defeated the Bulgarian wrestler in the quarterfinals. Ravi faced Kazakhstan’s Sanayev Nurislam in the semi-finals.

India’s fourth medal in the Tokyo Olympics 2020 on 4 August has been confirmed. Wrestler Ravi Kumar In the semi-final match, Ravi defeated NurIslam Sanayev of Kazakhstan and made it to the final. With this, Ravi has ensured a medal for the country. In the final of the 57 kg weight category, Ravi lost to two-time world champion Javur Yuguyev of Russia. However, Ravi returned to India only with a silver medal. Yuguav beat them by 3 points.

Her Zodiac sign is Sagittarius. Ravi holds a net worth of ‎$1 million.

Some Important Facts About Ravi Kumar

If you have Some more Important details about Wrestler Ravi Kumar Dahiya, Please comment below we will be updated soon.