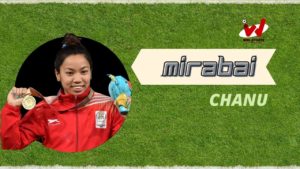 Mirabai Chanu is an Indian weightlifter who has recently won the silver medal at Tokyo Olympics in Women’s 49 kg, this is the first medal of India in this event.

Mirabai Chanu was born on 8 August 1994 and raised in a small village in Manipur, Mirabai was very talented since childhood and she grew up there. In those days, Kunjurani Devi, a female weightlifter from Manipur, was the star and went to play in the Athens Olympics. Just the same scene settled in the mind of little Meera and the youngest of six siblings Mirabai, who decided to become a weightlifter.

She started the practice in 2007, she had not an iron bar for practice so Mirabai used to practice with bamboo. There was no training center in the Mirabai’s village, so she used to go 50-60 km away for training.

In 2014, Chanu got the first major breakthrough of her career in the Glasgow edition of the Commonwealth Games, She bagged a silver medal in the 48 kg weight category. With this hard work, in 2016, she qualified for the 2016 Rio Olympics in the women’s 48 kg lifter category. But Unfortunately, she failed to finish and take out with the “Did Not Finish” tag, because She failed to lift weights in one of her three attempts of the clean and jerk section.

But she did not give up and made a strong comeback in international competitions. In 2017, she came back and bagged the gold medal by lifting a competition record 194 kg at the 2017 World Weightlifting Championships held at Anaheim, CA, United States.

Now, In 2021 Mirabai Chanu bagged Silver Medal in the 49kg weightlifting category for India at the 2020 Summer Olympics Games held in Tokyo. With this medal, she became the first 1st Indian weightlifter to grab a medal in this event.

Some Important Facts About Mirabai Chanu

If you have Some more Important details about Weightlifter Mirabai Chanu, Please comment below we will be updated soon.