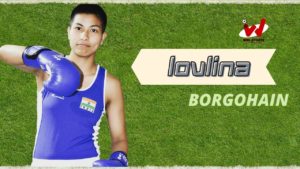 Lovlina Borgohain is an Indian Amateur boxer who represents the country in the Welterweight category. She is also the sixth person from Assam to receive the Arjuna Award. These days everyone searching about Lovlina Borgohain’s religion that’s why we special mentioned below for those.

Lovlina was born in Assam on 2nd October 1997 to Tiken and Mamoni Borgohain. Her father is a small-scale businessman. Lovlina began learning kickboxing at a young age after being inspired by her sisters Licha and Lima who are national champions in the sports. Later she switched to boxing and was recognized by coach Padum Boro at her school in a boxing trial held by Sports Academy. She then began training at the Boxing Academy in 2012.

In 2017, Lovlina bagged a bronze medal at the Asian Boxing Championship in Vietnam. She also won the second bronze at the President’s Cup, Astana that year. 2018, Lovlina was selected to participate in the 2018 Commonwealth Games welterweight boxing category. However, she lost in the quarterfinals against UK’s Sandy Ryans.

In the same year, she won a gold medal in the Inaugural Indian Open. She also claimed the silver medal at the Ulaanbaatar Cup, Mongolia, and a bronze medal at the 13th International Silesian Championship. In the same year, she represented Indian In the AIBA Women’s World Boxing Championship, New Delhi, and won a bronze medal in the Welterweight category. In the following year, she settled for bronze after she was defeated by China’s Yang Liu in the semi-finals.

In 2020, Borgohain qualified for the Olympic 69kg after winning over Uzbekistan’s Maftunakohn Melieva at the 2020 Asia and Oceania Boxing Olympic Qualification Tournament. In the same year, she was honored with the Arjuna Award by President Ram Nath Kovind for her outstanding performance. As a part of the preparation for the Tokyo Olympics, Lovlina trained at Assisi, Italy.

Boxer Lovlina created history as she became a confirmed medal contender for her country after reaching the semi-finals, becoming the first woman to win a medal from her state. So we shouldn’t waste our time searching about Lovlina Borgohain’s religion, but rather we should appease her for the last round in Tokyo Olympics 2020 boxing Event.

Indian boxer Lovlina Borgohain lost to defending world champion Busenaz Surmenelli of Turkey in the semi-finals at Tokyo Olympics 2020 boxing Event. Lovlina’s dream of reaching the Olympic final was shattered and she had to be content with the bronze medal.

Her Zodiac sign is Libra. Lovlina holds a net worth of ‎$1 million.

Some Important Facts About Lovlina Borgohain

If you have Some more Important details about Boxer Lovlina Borgohain, Please comment below we will be updated soon.