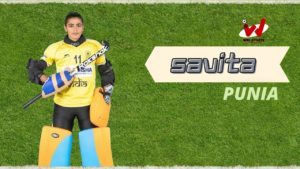 Savita Punia is an Indian field hockey player and a member of the Indian National team. She plays the position of a Goal Keeper.

Savita Punia was born on 11th July 1990 in Haryana. She received her education at the Sirsa district of Haryana. Savita was encouraged by her grandfather Mahinder Singh to take up Hockey as a sport. She then joined the Sports Academy of India center at Hisar for professional training. She was trained by Sunder Singh in her early years. In 2007, Punia was picked for the national camp where she trained with a top goalkeeper.

In 2008, Punia made her Internation debut in a four-nation event in Netherlands and Germany. In 2009, she played for the team in the Junior Asia Cup. In 2011, she played her first senior-level international match and played in more than 100 games. In 2013, Punia saved two goals in the penalty shootout. at the 8th Women’s Asia Cup, Malaysia. The team bagged the bronze medal in the event.

She also helped the team win the bronze medal in the 2014 Incheon Asian games. In 2015, Punia was presented with the ‘Baljit Singh Goalkeeper of the Year’ award at the Hockey India Annual Awards. In 2016, Punia gave her best performance and led her team to victory against Japan in the Rio Olympics qualification match.

In 2017, Punia’s team finished 6th in the Hawke’s Bay Cup in New Zealand. In the same year, her team competed in the Women’s Hockey World League. In 2018, the team won their final match against China in the Asia Cup. She was also honored with the goalkeeper of the tournament award. This achievement booked the Indian team a seat at the 2018 World Cup, London. In 2021, she helped her team defeat World No. 2 Australia and qualified for the semi-finals at the Tokyo Olympics.

Punia’s Zodiac sign is Cancer. She works as an assistant coach with SAI, Delhi.

Some Important Facts About Savita Punia

If you have Some more Important details about Hockey Player Savita Punia, Please comment below we will be updated soon.