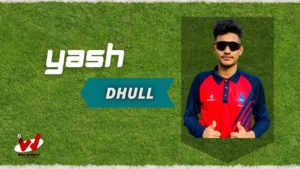 Delhi’s young batsman Yash Dhull has been given the captaincy of the Indian team for the Under-19 World Cup 2022. Yash Dhull is a diligent Indian cricketer Who is a right-handed middle-order batsman and has also led Delhi’s Under-16, Under-19, and India Under-19 teams.

Yash Dhull was born on 11 November 2002 in Delhi. He started playing cricket at an early age with the support of his family. Yash’s father Vijay Dhull used to work as an executive with a cosmetic brand, but had to quit his job to pursue his child’s career.

Yash’s father had provided him with batter kits and English bats to play good cricket at a young age. His family was very supportive of his game.

The right-handed middle-order batsman entered the Bal Bhavan school academy at the age of 11 and developed his game from there.

Yash entered the cricket academy at the age of fewer than 11 years and started developing his game from there. Yash has emerged as a better cricketer since childhood, he has been playing good cricket since the beginning and is taking this game forward.

The journey till Under-19 has not been easy for Yash Dhul. With time, Yash went on to improve his game better and he got selected in his state team. In the Vinoo Mankad Trophy, he scored 302 runs in five matches for his team DCA at an impressive average of 75.50. Yash, who hails from Janakpuri, New Delhi, got selected in Delhi’s Under-16, Under-19 team due to his good game and he also led those teams, and now he is going to lead India’s Under-19 team in Under-19 World Cup 2022.

Yash’s mother was the first to recognize his cricketing talent. At the age of 4, Yash’s mother first noticed Yash’s understanding of the ball and interest in cricket. After this, Yash’s father himself used to make his son practice on the roof of the house.

Yash’s zodiac singh is Scorpius and his estimate networth is not available yet. yash’s family information is not available on internet right now, Whenever he disclose his family we will definitely update soon.

Some Unknown Facts About Yash Dhull

If you have Some more Important details about cricketer Yash Dhull. Please comment below we will be updated soon.