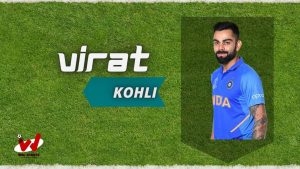 Virat Kohli is an amazing Indian cricketer who plays for Delhi in their domestic career and for Royal Challengers Bangalore in the Indian premier league. He is the captain of the Indian National Cricket team and has led India to many victories.

He is a right-handed batsman and rarely bowls right-arm medium. His incredible performances have often made his team proud and close to victory. He has performed significantly well in all the formats of cricket.

Virat Kohli was born on 5 November 1988 in Delhi, India. He was raised in Uttam Nagar and studied at Vishal Bharti Public school. He always adored playing cricket and started playing at an early age. At the age of nine, he joined West Delhi Cricket Academy after his father recognized the potential in him.

Virat Kohli first played for Delhi in the under-15 category in October 2002, in 2002-03 Polly umrigar trophy. He performed unexpectedly well and was chosen as a captain for the 2003-04 Polly Umrigar trophy. He again performed tremendously well by making two centuries and two fifties. In 2004, he was selected for the Vijay Merchant Trophy, where his team won the tournament and he finished as the highest scorer.

He scored brilliantly when he was selected for India Under-19 team against England and India won both the series.  Kohli made his first-class debut in 2006 for Delhi against Tamil Nadu. He garnered the attention of both critics and spectators when he played for his team against Karnataka on the next day after his father’s death.

In 2007, he made his T20 debut and was the highest run-getter for his team. He was the second-highest run-getter in the triangular series against Sri Lanka and Bangladesh. In February- March 2008, Kohli was selected as the captain for the under-19 World Cup, he played exceptionally well, which made India win the tournament. In 2008, following his victory, he was bought by Royal Challengers Bangalore in Indian premier league auctions. Since then Kohli has been part of the team.

In 2008, he was selected for his first-ever ODI series against Sri Lanka. He made his first ODI fifty which he made in the fourth match, which helped India win the series. Virat was selected for the Emerging player’s team and he played very well, all the selectors applauded him for his performance. His brilliant performances throughout his ODI career have astonished the selectors and spectators.

In 2010, he was made the vice-captain for the tri-series and Raina was made the captain. Although India was out of the series Kohli became the fastest player to reach ODI 1000 runs. He continued smashing records and played exceptionally throughout his ODI career.

Virat made his T20 debut in 2011, in his debut series he didn’t perform well although the team won he made an average total. He was dropped from the test team, but he was the leading run-scorer in ODIs against England in 2011. He failed to make a mark in the test series and got into controversy. Still, he kept performing extremely well in his entire ODI career.

Virat Kohli’s father was a criminal lawyer, he passed away in the year 2006. His mother is a housewife. He has two siblings Vikas and Bhawna.

Some important facts about Virat Kohli-

If you have Some more Important details about cricketer Virat Kohli, Please comment below we will be updated soon.