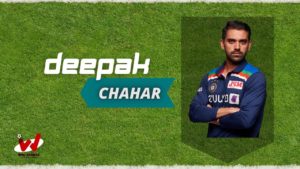 Deepak Chahar is also known as Deepak Lokendra Singh Chahar is an Indian bowler. He is a medium-paced bowler and lower-rank batsman. He plays for Rajasthan in domestic cricket and he was bought by CSK in the Indian premier league.

He holds the record of being the first Indian male cricketer to hit a hat-trick in international Twenty20 cricket. In 2020 he was awarded T20 Performance of the year by ICC for exceptional performance of six wickets and seven runs.

Deepak Chahar is an unpolished gem in the Indian cricket team, he can show exceptional performance with the right guidance.

Deepak Chahar was born on 7th August 1992 in Agra, Uttar Pradesh, India. His father Lokendra Chahar is a retired India Air Force official. He was brought up with his cousin brother Rahul Chahar who is a fellow Indian cricketer.

He started his career in the year 2010-11 Ranji trophy. He was initially rejected by the director of the Rajasthan cricket association, but he never forgot that perseverance is the key.

He was rejected at the age of 16 but he never lost hope, he made his debut at an age of 18 and proved to be an exceptional player. He made his debut in 2010-11 in Ranji season, his bowling style is very similar to that of Bhubaneswar Kumar and Praveen Kumar.

Chahar’s real talent was on show during the 2017-18 Syed Mushtaq Trophy, where he performed significantly well.

Chahar made his international debut for India on 25 September 2018 during Asia Cup against Afghanistan.

Deepak was initially a player of Rising Pune supergiant but he played only 5 matches for them and got only one wicket. He was later robbed by Chennai Super Kings in 2018, and he showed extraordinary performance for them.

MS Dhoni allowed him to open for their team and Chahar took and exploited the opportunity, bowled exceptionally well. He shined in the year 2019 and MS Dhoni gave him all the three power-play overs.

Deepak Chahar’s sister Malti Chahar is a model, actor, and has also been a finalist of Miss India 2014. While Sanjana Chahar is in the medical field.

And now let’s talk about Deepak Chahar’s girlfriend or fiance, after the match of CSK vs PBKS in Dubai, Deepak proposed to his girlfriend in the stand and finally make his relationship official. Then couple exchanges the ring in front of the crowd.

Deepak Chahar was dating his girlfriend for a long time. His girlfriend is the sister of Bigg Boss 5 contestant Sidharth Bhardwaj, and her name is Jaya Bhardwaj.

Some Unknown Facts About Deepak Chahar

If you have Some more Important details about cricketer Deepak Chahar. Please comment below we will be updated soon.