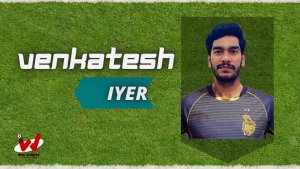 Venkatesh Iyer is an amazing batsman and right-arm medium bowler who has shown some fascinating performances in his career. He plays for Madhya Pradesh in domestic cricket and is all set to perform for Kolkata knight riders in the Indian premier league.

Venkatesh Iyer was born on 25 December 1994 in Indore Madhya Pradesh. He started playing cricket from an early age. He is was a very bright student. He has a B.Com degree and he also studied for CA.

Venkatesh made his Twenty20 debut for Madhya Pradesh in March 2015, against Railways. He has played quite endearingly in his debut match. He made his List A debut against the Saurashtra Cricket team at Saurashtra Cricket Association stadium in December 2015. Venkateshperformed did exceptionally well in this match.

He struggled for three years and got an opportunity to play red-ball cricket against Hyderabad. He made his first-class debut for Madhya Pradesh in 2018-19 in the Ranji trophy on 6 December 2018. Venkatesh didn’t get the opportunity to bat.

In February 2021 he was bought by Kolkata knight riders in Indian premier league auctions.

Some Important Facts About Venkatesh Iyer

If you have Some more Important details about cricketer Venkatesh Iyer, Please comment below we will be updated soon.