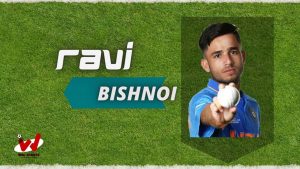 Ravi Bishnoi is an unusual bowler who shocked the spectators by his performance in Under-19 Cricket World Cup in 2020. He is an Indian bowler who occasionally bats Right handed. Ravi has shown some fascinating performance at such a small age.

He made his Twenty20 debut for Rajasthan in 2018-19 Syed Mushtaq Ali Trophy. And made his List A debut for the same team the next year.

Ravi Bishnoi was born on 5 September 2000 in Jodhpur Rajasthan. Due to lack of support for children eager to play cricket he built a cricket academy along with a friend and two coaches, named Spartans Cricket Academy.

He was not selected once for under 16 and twice for the under-19 cricket team. His coaches asked them to give him another chance and he got selected in Rajasthan Cricket team.

Ravi debuted Twenty20 cricket for Rajasthan in 2018-19, performing extraordinarily well. He played in two matches the next year and performed well. In Rajasthan clash against Tamil Nadu, he played in place of Rahul Chahar.

In five Vijay Hazare Trophy games he played exceptionally and took a lot of wickets for Rajasthan. He was also a part of India A Squad in Deodhar Trophy but didn’t perform well. He also represented Rajasthan in BCCI Vinoo Mankad Trophy 2019 and took wickets becoming the highest wicket taker of the tournament.

Ravi Bishnoi was roped in by Kings XI Punjab for a whopping INR 2 crores.

Ravi’s father is headmaster of govt school, his mother is a homemaker. He has one brother named Ashok Bishnoi, and two sisters Rinku and Anita Bishnoi.

Some Important Facts About Ravi Bishnoi

If you have Some more Important details about cricketer Ravi Bishnoi. Please comment below we will be updated soon.