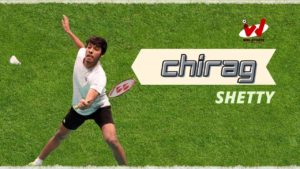 Chirag Shetty is a professional Indian Badminton Player who is born in the city of Mumbai. He is ranked 11th in BWF World Ranking Men.

Chirag Shetty was born on 4th July 1997 in Mumbai, India, Chirag took up badminton at a very young age. Although none of his family members had played the sport his father has a keen interest in playing squash. Chirag began his training at the age of seven. He decided to pursue the sport as a career when he turned 16 years old. He trained at the Goregaon Sports Club under the guidance of Uday Pawar.

In 2013, Chirag made his professional debut in the Sushant Chipalkatti Memorial India Junior International Badminton Championship. He didn’t make it to the main draw. In 2014, he qualified for the mixed doubles with Kuhoo in the Tata Open India International Challenge. The pair, however, lost the match in Quarterfinals.

He also clinched the gold medal with M.R Arjun in the Swiss Junior Open 2014 Men’s Doubles. In the same year, Chirag brought home his second gold of the year winning the Yonex Belgian Junior against Scotland. He also qualified for the Jati BWF World Junior Championship quarterfinals but lost to Thailand in the Men’s Doubles.

He also claimed his first gold medal of the year in the Yonex Sunrise Vietnam International Challenge. In 2018, Chirag won the silver medal with Satwiksairaj in the Men’s Doubles in the Syed Modi International Badminton Championship. He also won the bronze medal in the Yonex French Open Men’s Doubles. Chirag competed in the Asian Games 2018 in the Men’s doubles event with Rankireddy. In that year, Chirag also brought home the silver medal in the Commonwealth games.
In 2019, Chirag qualified for the Semifinals match against Indonesia.

He also bagged the silver medal in the Yonex Frenc Open Men’s Doubles against Indonesia. He claimed the title in the Toyota Thailand Open Men’s Doubles. In the 34th brazil International Challenge 2019, Chirag won the gold medal in the Men’s doubles. In the same year, He has conferred the Arjuna Award with his partner Satwiksairaj. In 2020. Chirag competed in the Badminton Asia Team Championships and the Daihatsu Indonesia Masters 2020. In 2021, the Mumbai shuttler settled for bronze in the Yonex Swiss open and the Toyota Thailand Open.

Some Important Facts About Chirag Shetty

If you have Some more Important details about Badminton Player Chirag Shetty, Please comment below we will be updated soon.