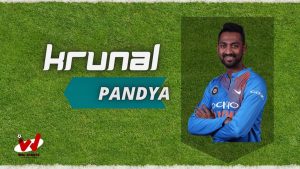 Krunal Pandya is an exceptional Indian all-rounder who plays for Baroda in domestic cricket and for Mumbai Indians in the Indian premier league. He bowls slow left-arm orthodox and bats left-handed. He has so far shown some amazing performances climbing fast in his IPL career and National cricket career.

He made his first-class debut on 6 October 2016 for Baroda. He has played exceptionally in all cricket formats from domestic to international.

Krunal was born on 24 March 1991 in Baroda, Gujarat, India. He learned cricket in Ahmedabad where Kiran More and Jitender Singh coached him. When his family moved to Baroda, he started going to Kiran More’s Academy.

More refused to take any money from Krunal’s family, in hard times. Krunal faced many hardships at the start of his career as when his career was about to start he faced a shoulder injury and had to stay out of action for almost a year.

After rising from all those difficulties, Krunal Pandya made his first-class debut on 6 October 2016 in the Ranji trophy. He played for Baroda in his T20 debut match against Bengal in Syed Mushtaq Ali Trophy.

He started his List A career against Gujarat in 2016-17 Vijay Hazare Trophy where he became the lead run-scorer. He was good at both bowling and batting, in this trophy and scored three half-centuries in this match. In 2017 he was in the India A team that was declared triumphant in their match against South Africa A and Afghanistan A.

He scored well in his match for Baroda in the 2018-19 Trophy and was named in India A Squad for Deodhar Trophy. Krunal was also the captain of the team in the 2019-2020 Vijay Hazare Trophy.

Krunal Pandya was named in India’s Twenty20 international tour against West Indies and Australia. He made his debut for the same on 4 November 2018. He scored so well that he was selected for the Indian T20 international squad against Australia, he won the man of the match for this match.

Krunal’s father was a businessman who passed away this year on 16 January 2021. He married his girlfriend Pankhuri Sharma on 27 December 2017.

Some Important Facts About Krunal Pandya

If you have Some more Important details about cricketer Krunal Pandya. Please comment below we will be updated soon.