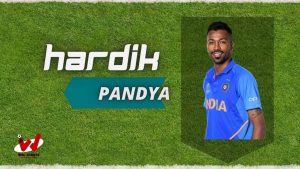 Hardik Pandya is an exceptional Indian all-rounder who plays for Baroda in domestic cricket and for Mumbai Indians in the Indian premier league. He is an amazing all-rounder who bats Right-handed and bowls right-arm fast-medium.

Pandya started playing cricket for his domestic team at the age of 20 years in 2013. He was the main reason Baroda won the Syed Mushtaq Ali Trophy in 2013-14.

Hardik was born on 11 October 1993 in Surat, Gujarat, India. His father shut his smoothly running business to help his sons practice cricket in a better place. He studied till ninth grade then dropped out to focus on cricket.

For the sake of Hardik and Krunal’s passion, their father left his car business in Surat and shifted to Baroda, where he admitted both his sons to the Cricket Academy of former India cricketer Kiran More.

Kiran More was well aware of his father’s weak financial position and was impressed by the early performances of both the brothers. Due to which he waived off the three years’ academy fees of those two brothers.

His father told the Media that Hardik initially wanted to become a spinner till the age of 18 then he switched to fast bowling.

Hardik Pandya was roped in by Mumbai Indians in 2015, because of his exceptional performance, he was selected in the Indian National Cricket team. Hardik Pandya has one of the most incredible IPL scorecards of an Indian player.

Hardik made his T20 international debut on 27 January 2016 against Australia in Adelaide. He had a bad start but he performed well in the last two overs. In the same year, Hardik made his ODI debut against New Zealand at Dharmshala. He became the fourth player to be named player of the match in his debut match. He made his test debut on 26 July 2017, he scored a maiden century and became the first batsman to score a century before launch.

Hardik Pandya’s brother Krunal Pandya is also an Indian cricketer. He got engaged to his girlfriend Natasa Stankovic in a private boat on 1 January 2020. They have a son who was born on 1 July 2020.

Some Important Facts About Hardik Pandya

If you have Some more Important details about cricketer Hardik Pandya. Please comment below we will be updated soon.