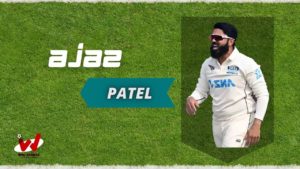 Ajaz Patel is also known as Ajaz Yunus Patel, and he is a Kivi’s (New Zealand) Cricketer but of Indian origin. He is a left-arm spinner and lower-rank batsman. He plays for Central Districts in domestic cricket.

Indian-origin New Zealand player Ajaz Patel had set a new record in 2021 by stacking India for 10 wickets, he is the third player ever to do so.

Ajaz Patel was born on 21 October 1988 in Mumbai. His family had settled in New Zealand when Ajaz was just 8 years old. When he started cricket, he was a left-arm fast bowler but later he became a spinner after the opinion of the coaches.

Ajaz’s father Yunus Patel used to do refrigeration work. Ajaz’s mother Shahnaz Patel used to work as a teacher in a school. Ajaz also has 2 younger sisters, one’s name is Tanzeel Patel and the other’s name is Sana Patel.

Although his family belongs to Gujarat, he was born and brought up in Mumbai. His parents lived in Jogeshwari, Mumbai, and started his initial education at Mount Mary School, Goregaon West.

Ajaz had come to live with his family in the city of Auckland, New Zealand at the age of eight. Here his father had a small shop, so later the whole family shifted to New Zealand, Ajaz’s uncle got him to join a New Lynn cricket club there.

Ajaz Patel started his cricket career by playing as a fast bowler for the team of Auckland, he did not get much success in that. Due to this, he started bowling spin in domestic games, in which he was successful to a great extent.

Ajaz made his professional cricket debut in 2012, On 7 December 2012, Ajaz made his T20 debut for his home team Central Districts in New Zealand’s home T20I series against Wellington. He conceded 37 runs in his 3 overs with the highest economy of the match of 12.33.

3 days after his first T20I match, Ajaz made his first-class debut against the same team in the Plunket Shield Series, taking 3 wickets in his first match and overall for his team in both innings. Contributed 7 runs for.

On 27 December 2015, Ajaz made his List-A debut playing in The Ford Trophy against the CenterBury team. Ajaz holds the record for most wickets in the 2015–16 Plunket Shield season with 43 dismissals.

Ajaz Patel played his first international cricket T20 match against Pakistan on 31 October 2018. In which he took 1 wicket for 27 runs in 4 overs.

After this, on 16 November 2018, he started his Test career while playing against Pakistan. In the first innings of this match, Ajaz also took 6 runs in 43 balls and 2 wickets for runs at an average of 2.66. He took five wickets in the second innings, with New Zealand winning by four runs. Ajaz was awarded the Player of the Match award for taking a total of 7 wickets in his very first match

In 2020, The New Zealand Cricket Board also gave him a central contract. In August 2021, Patel was named in New Zealand’s ODI squad for their tour of Pakistan.

Till now Ajaz Patel has taken 33 wickets in 19 innings of 11 Test matches. Apart from this, he has also taken 11 wickets while playing 7 T20 International matches. Ajaz has taken 251 wickets in 68 matches in first-class cricket.

Incredible achievement as Ajaz Patel picks up all 10 wickets in the 1st innings of the 2nd Test. He becomes the third bowler in the history of Test cricket to achieve this feat.

Ajaz is a Libra blood, he was brought up in a small family, grew up with his two sisters Tanzeel Patel and Sana Patel. He is a married man, Ejaz Patel got married to Nilofer Patel in December 2014. His wife Nilofer Patel is also a resident of Mumbai.

Some Unknown Facts About Ajaz Patel

If you have Some more Important details about cricketer Ajaz Patel. Please comment below we will be updated soon.