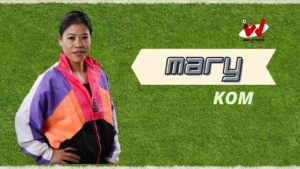 Mary Kom is an Indian amateur boxer, politician, and Member of Parliament, Rajya Sabha. She is a five-time world amateur boxing champion. She is also known as MC Mary Kom or Magnificient Mary.

Mary Kom was born on 24th November 1982, in Kandathei Village, Manipur, India. Her parents were tenant farmers who worked in Jhum fields. Being the oldest of the four siblings, Mary had to work from a young age to earn for her family while taking care of her studies. Mary’s father was a wrestler in his younger days. She studied in Loktak Christian Model High School at Moirang up to her 6th grade and then transferred to St Xavier Catholic School.

She was an active sports player and competed in the javelin and 400 meters running. Mary was inspired by 1998 Bangkok Asian games gold medalist, Dingko Singh, to become a boxer. She completed her senior year in Adimjati High School, Imphal but could not pass her matriculation exams. She then graduated from Churachandpur College after appearing for the exam from NIOS.

At the age of 15, Kom decided to pursue her dream of becoming a boxer and enrolled in a sports academy at Khuman Lampak, Imphal, where she was coached by M. Amarjit Singh. At this time her family was not aware of her decisions. However, when Kom got featured in the newspaper after winning the 2000 state boxing championship, her father began to support her goals.

After Mary’s first career win in 2000, she was honored with the Best Boxer Award at the First State Level Invitation. In the same year, she also claimed the gold in the Seventh East India Women’s Boxing Championship held in West Bengal. She made her International debut at the AIBA Women’s World Boxing Championship in the United States. She won the silver medal in the 448 kg weight class.

In 2017, she received her 5th gold at the Asian Boxing Confederation boxing championship held in Vietnam. In 2018, mary won her first Commonwealth Games gold in the 48 kg category. She became the first woman to win 6 World championships. In 2019, she was named the female representative of the boxing athlete ambassadors group for the 2020 Tokyo Summer Olympics by the International Olympic Committee. In 2021, she made it to the semi-finals of the Boxam International Tournament held in Spain. She settles for bronze after her loss against America’s Virginia Fuchs.

Mary Kom is married to Karung Onkholer in 2005. They have 3 sons, twins born in 2007 and the youngest son born in 2013. In 2018, The family adopted a girl name, Merilyn. She runs the Boxing foundation registered under a Charitable Trust to help promote boxing amongst underprivileged youngsters in Manipur. Her Zodiac sign is Pisces. Kom holds a net worth of ‎$1 million.

Some Important Facts About Mary Kom

If you have Some more Important details about Boxer Mary Kom, Please comment below we will be updated soon.