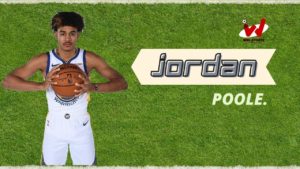 Jordan Poole is an American Basketball player who plays for the Golden State Warriors of the NBA. His position in the team is a Shooting Guard.

Jordan Poole was born on 19th June 1999 in Milwaukee, Wisconsin to Anthony Poole and Monet Poole. He attended Rufus King High School, where he played for the school team. He transferred to La Lumiere School, Indiana during his Senior year. In 2016, he was selected Dick’s National High School Championship winner. In 2017, he joined the University of Michigan and played for their team, Michigan Wolverines. He was a member of the 2018 Big Ten Conference Men’s Basketball Tournament Championship team. He was brought to the limelight with his game-winning buzzer-beater three-point shot. Poole helped the Wolverines advance to the 16th round of the 2018 NCAA Divison Men’s Basketball tournament.

In 2019, Jordan was drafted for the 2019 NBA list by the Golden State Warriors. His debut in the 2019-20 season was on 24th October 2019. His Team lost in the game against Los Angeles Clippers, with Poole scoring Five points, two rebounds, two assists, and a steal. In the same year, he played for the Santa Cruz Warriors of the NBA G-League.

His Zodiac sign is Gemini. Jordan Poole holds a net worth of ‎$3 million. He adopted a pair of rescued cats, Kai and Kota from San Francisco Animal Care and Control.

Some Important Facts About Jordan Poole

If you have Some more Important details about Basketball Player Jordan Poole, Please comment below we will be updated soon.