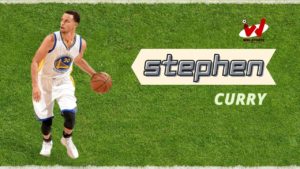 Stephen Curry is an American professional basketball player. He plays the point guard position for the Golden State Warriors of the National Basketball Association(NBA).

Stephen Curry II was born on 14th March 1988 in Akron, Ohio. His father was a member of the Cleveland Cavaliers. As a middle-schooler, Stephen played for the Queensway Christian College boys’ basketball team. He was also a member of Toronto 5-0, a club team that plays across Ontario. He completed his high school education in Charlotte Christian School, North Carolina. Stephen played in the basketball team and led his school to three conference titles. In 2006, he was recruited by Davidson College. He was part of the Davidson Wildcats basketball team that played in the NCCA and NBA tournaments.

Stephen Curry’s made his national debut in the United States national team at the 2007 FIBA U-19 World Championship. He played for Team USA and claimed the silver medal. In 2010, he played in the 2010 edition and won the gold medal. He helped his team to win the title In the 2014 tournament.

In 2009, Stephen was selected for the 2009 NBA by the Golden Warriors. He appeared in the 2009-2010 season. He was named Western Conference Rookie of the Month. Stephen finished the season with 166 3 pointers, which was at that time the highest in NBA history. IN the 2010-11 season, Curry appeared in 74 games. He became the first golden state warrior to lead the NBA in free throw percentage. In May 2011, he was a recipient of the NBA Sportsmanship Award. In the 2011-12 season, he only appeared in 26 games due to his ankle injury.

Stephen made a comeback in the 2012-13 season playing in 78 games. He also claimed the Western Conference Player of the Month honors in April 2012. In the 2013-14 season, he led the league in 3 pointers. In February 2013, he made his first All-Star appearance and was the first one from Warriors. Curry was the leading vote-getter for the All-Star Game and won the 3 Point Contest in the 2014-15 season. In April 2014 he broke his league record for three-pointers. He has also been voted the NBA’s Most Valuable Player. His team finished the season with 67 wins.

In 2014-15 the Warriors knocked off the Cleveland Cavaliers in the NBA finals, earning its first championship. The super-star guard led the team to an NBA record of 73 wins. In May 2016, Curry became the first player to be named MVP by unanimous vote in NBA history. In 2017, Curry helped the Warriors to the Finals against the Cavaliers. They won their second championship. In the 2018 playoff, His team claimed the third championship title. In the 2018-19 season, the warriors managed to make it to the finals. His team lost the match against the Raptors In the 2019-20 season. In the 2020-21 season, his team’s win against the Denver Nuggets earned him the tag of the franchise’s all-time scoring leader. He was also named the Western Conference Player of the Month for April.

In 2011, Stephen married Ayesha Alexander who is a Canadian Actress and an author. They have three children; two daughters, Riley and Ryan, and a son, Canon. He is an avid golfer and used to play the sport in high school. He is the 85th highest-paid NBA player. His net worth is $201 million.

Some Important Facts About Stephen Curry

If you have Some more Important details about Basketball Player Stephen Curry, Please comment below we will be updated soon.