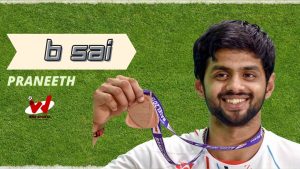 B Sai Praneeth is a professional Indian Badminton Player. His full name is Bhamidipati Sai Praneeth. He becomes the first Indian male badminton player to win a bronze medal in the BWF World Championships in the year 2019 after Prakash Padukone in 1983. Sai Praneeth was awarded by the Government of India in 2019 from Arjuna Award.

He was born on 10 August 1992, to the family of Seshadri Deekshitulu and Madhavi Latha. He belongs to the middle class family where his parents work in a private company in the city of Hyderabad. In the year 2008, Praneeth joins the Gopichand Badminton Academy where he was one of the some students who has joined the academy made by the national coach Pullela Gopichand. He represents India internationally in the Singles and Doubles categories.

Winner of the year in 2011, Iran and in 2012, Bahrain Challenge tournaments and in the year of 2016, won the Canada Open Grand Prix. He became the fourth Indian Badminton Player to win the Singapore Open Super Series in the month of April, 2017. In June 2017, he won the Thailand Grand Prix Gold title.

His favorite badminton player is Saina Nehwal and his hobbies are listening to music. Birthday comes in the month of August 10, 1992. He has a younger brother whose name is B. Sai Praveen.

Some Important Facts About B Sai Praneeth

If you have Some more Important details about Badminton Player B Sai Praneeth, Please comment below we will be updated soon.