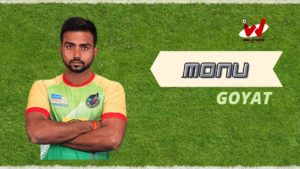 Monu Goyat is a popular name in Indian sport Kabaddi and Superstar of Kabaddi of Haryana. He is an Indian professional Kabaddi player, who is playing for Patna Pirates in this year’s Pro Kabaddi League season 8.

Kabaddi player Monu Goyat was born on 16th October 1992 in the Village of Bhiwani, Haryana. Monu Goyat is also from the same village where Naveen Goyat is from. He started playing kabaddi at a very young age. He taught Kabaddi from his uncle Vijender Singh, he is also a former kabaddi player.

He did not get a chance to play much Kabaddi in the beginning, he did not get much opportunities even at the school level, so he did not play many tournaments.

He started his career in the kabaddi game from the Indian Army Kabaddi Team in 2011, which means after a long time he was selected in Army Kabaddi Team. Then he Represented Services Sports Control Board. In 2018, He made his debut for India at Dubai Kabaddi Masters. Due to his consistently good performance, he caught Vivo Pro Kabaddi Frenchisis’s attention.

Then he debuts in PKL Season 4 with Bengal Warriors. In this season he grabbed 59 points in 13 games and was among the top raiders of PKL. He became the best and top raider for Bengal warriors in that season.

In Season 5 of PKL, He was picked by Patna Pirates. In that season he scored 191 raid points in 26 matches and became the fourth-highest scoring raider in the league. 42 points out of 191 raid points scored in do-or-die situations.

In Season 6 of PKL, Monu Goyat emerged as the highest bidder in the league’s history till date when he was bought by Haryana Steelers for ₹15.1 million (US$210,000) in 2018–19 Pro Kabaddi League season. He captained the team in the absence of the old captain of the team, Surendra Nada. Goyat scored 160 raid points in 20 matches with an average of 8 raid points per match.

He was also part of the India national kabaddi at the 2018 Asian Games.

In the 2021 Pro Kabaddi League season 8, He retained by his team Patna Pirates.

Monu Goyat is the son of a farmer and Monu Goyat’s father Ram Bhagat Singh is a farmer and his mother Darshani Devi is a housewife. He has a brother Devendra Goyat. Monu’s Zodiac sign is Libra. His net worth is estimated to be $ 1 million.

Some Important Facts About Monu Goyat

If you have Some more Important details about Kabaddi player Monu Goyat, Please comment below we will be updated soon.