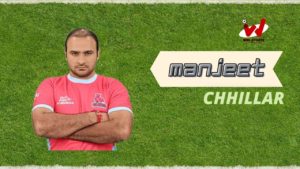 Manjeet Chillar is an Indian kabaddi player who is playing for the Dabang Delhi KC in Vivo Pro Kabaddi League Season 8 and the Indian National Kabaddi Team.

Manjeet was born on 18th August 1986 in New Delhi, India. His father is employed in the Haryana Police and his mother is a homemaker. As a young boy, Manjeet aspired to be a wrestler and trained to achieve his goal. However, he could not continue his career in wrestling after sustaining a nose injury. Manjeet then found interest in Kabaddi and began pursuing the sport professionally.

Manjeet made his Kabaddi debut in 2010 at the Asian Games China. In 2012, he won the bronze medal at the Asian Beach Games, China. In 2014, he joined the Bengaluru Bulls for the Pro Kabaddi League season 1. His captaincy led the team to the semi-finals. In season 2, Manjeet was awarded the Most Valuable Player of the Season award. In 2016, he was a part of the Puneri Pultans. His captaincy helped the team to finish in the third position in Season 3.

He continued to be a member of the Pune team for the 4th edition. In 2017, Manjeet captained the Jaipur Pink Panthers for season 5. In the following season, he moved to Tamil Thalaivas and played the position of defense leader. He became the first man to score 300 tackle points in Vivo Pro Kabaddi. In 2018, Manjeet was part of the team that won the title at Dubai Kabaddi Masters. In 2019, He continued to play for the Thalaivas in season 7.

Manjeet’s Zodiac sign is Leo. His net worth is estimated to be $1 million. He is currently an employee at Railways.

Some Important Facts About Manjeet Chillar

If you have Some more Important details about Athlete Manjeet Chillar, Please comment below we will be updated soon.