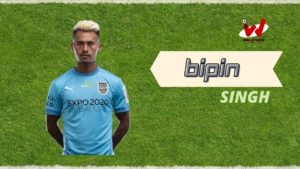 Bipin Singh is an Indian Professional Football player. Currently, he is playing in the Indian Super League side MUMBAI CITY FC as a Left Winger. He is a young sensation for Mumbai and the Indian national team. his appearance in the team gives confidence in the forward position.

He completed his schooling in his hometown Manipur and also started playing football from his school days. Bipin is very passionate about football since his childhood.

Bipin’s football career started at the age of 13, At this young age, he had joined the most popular youth club of Manipur Wafa Wangoi Club. He remained in this club for 3 years, after that he joined Manipur Police Sports Club and refined his skills and sports there.

After years of consistent performances, 17-year-old Bipin cleared his way to join Shillong Lajong for the 2012–13 I-League season and joined that club. He made his debut in the 81st minute of the match for Shillong Lajong in the I-League against ONGC at the Jawaharlal Nehru Stadium on 22 December 2012. In that match, Bipini could not do much for his team and his team lost that match.

For the first 3 seasons, he mostly appeared on the field instead of tired players and could not contribute much for his team. From 2015–16 I-League emerged as a key player for the club under head coach Thangboi Singto. He scored the first goal of his career and club against Chennai City on 19 February 2017, which took him 4 years to score. He made 38 appearances for the club in the I-League, this being his only goal.

Bipin was included in the player draft by ATK ahead of the 2017-18 Indian Super League season. He made his debut for the club on 17 November 2017 against Kerala Blasters. He finished the season with 2 ISL goals in 12 matches, a season where he made a mark for his brilliance and impressive play.

Bipin signed a 2-year contract with Mumbai City on 1 August 2018. Played his debut match for the club on 2 October 2018 against Jamshedpur, however, the match ended with a score of 2–2. Bipin played only 6 out of 22 matches of the season under head coach Jorge Costa, scoring his first goal for the club on 12 February 2020 against Goa in the 2019–20 Indian Super League season.

The best performance of his career came in the 2020-21 Indian Super League when he took a hat-trick of goals against Odisha, which also was the first hat-trick of the season. His last goal of that match was his team’s winning goal, which was an unforgettable moment for Bipin. Due to his excellent performance, his team Mumbai City won the title for the first time in the ISL.

On 19 April 2021, Bipin signed a new contract with Mumbai City extending his contract by four more years, keeping him at the club until May 2025.

Also Read About the young sensation of Goa Saviour Gama.

Bipin’s zodiac sign is Pisces. There is no information about his personal life or his wife. Bipin’s estimated net worth is ₹20.83m.

Some Important Facts About Bipin Singh

If you have Some more Important details about Football Player Bipin Singh, Please comment below we will be updated soon.