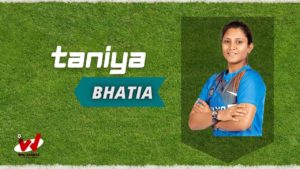 Taniya Bhatia is an Indian cricketer and a member of the Indian Women’s National cricket team. She is a Wicket-keeper and right-hand batsman for the team.

Taniya Bhatia was born on 28th November 1997 in Chandigarh, India. Her father used to play cricket at the all-India University Level. Following her father’s footsteps, she began her training under Yuvraj Singh’s father Yograj Singh, a former Indian cricketer. At the age of 11, she joined the U-19 team to represent Punjab. She was the youngest player to join the team at that time. In 2011, she played for the Senior Punjab team at the inter-state domestic tournament.

In 2013, Taniya joined the senior state team of Punjab. In the same year, she got selected for India A squad. In 2015, she captained the U-19 North Zone side in the inter-zonal cricket tournament, Guwahati. She scored 227 runs in the game. She went on a slump for two years and lost interest in cricket altogether. She overcame her obstacle with the help of her mother’s motivations and her family’s support.

In 2017, Taniya played for India A team against Bangladesh. In 2018, she made a comeback debuting in the Twenty20 International cricket for the Indian Women against South Africa. She became the first woman cricketer from Chandigarh to be a part of the national team. In the same year, she made her first appearance in the ODI against Sri Lanka. By the end of the match, she became the number one choice for the position of wicketkeeper in the team.

Taniya’s Zodiac sign is Sagittarius. She is managed by Fairplay Sports.

Some Important Facts About Richa Gosh

If you have Some more Important details about cricketer Taniya Bhatia. Please comment below we will be updated soon.