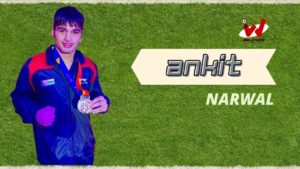 Ankit Narwal is a professional Indian Boxer. He is a part of the Indian Youth Team that won eight gold medals in the AIBA Youth Boxing World Championship 2021.

Ankit Narwal was born on 15th November 2003 in Rohtak, Haryana. His father is a self-taught coach who had trained Manju Rani of Manipur. It was Ankit’s father who ignited his passion for boxing at a young age. Currently, he is pursuing his Bachelor of Science in LPU.

In 2017, Ankit played Asian Junior Championship held in the Philippines. He bagged the bronze medal losing in the semifinals in his battle against Uzbekistan’s Janlonbek Yuldaishev. In 2018, the Haryana boxer won double bronze in the 52kg and 60kg categories in the 1st Khelo India School Games 2018. he won his third bronze in AIBA Youth World Championships held in Hungary In the same year. He lost in his semifinals spar with the Thai boxer, Atichai Phoemsamp. In 2019, He won double gold in the Khelo India U-17 Boys Boxing Championship Pune.

Ankit competed in the 52kg and 60kg fly. The Indian pugilist bagged the gold medal in Memorial Julia Tormy 2019, winning against Herceg M of Slovakia. He also achieved double silver in the 3rd Youth Men National Boxing Championship 2019, fighting in the 52 kg and 60 kg flies. Ankit won a sliver in his final battle against Japan’s Reito Tsutsumi in the ASBC Asian Youth Men Boxing Championship 2019. In 2021, 64kg boxer won a bronze for India in the AIBA Youth World Championship.

Some Important Facts About Ankit Narwal

If you have Some more Important details about Boxer Ankit Narwal, Please comment below we will be updated soon.