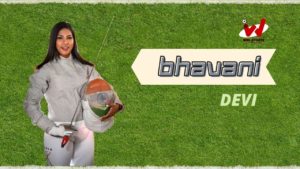 Bhavani was born on 27th August 1993 in Chennai, Tamil Nadu. Her father is a Hindu priest and her mother is a homemaker. She is the fifth child amongst her two elder sisters and two brothers. Devi was introduced to fencing at her school when she was studying in 6th grade. She began taking interest in the sport and developed her skills with passion and discipline. In 2008, she joined the Sports Authority of India Centre in Thalassery and began her professional training.

At the age of 14, she appeared in her first international tournament held in Turkey. However, she was expelled from the tournament for reaching 3 minutes late. In 2009, Devi made her comeback by winning a bronze medal at the Commonwealth Championship in Malaysia. In 2010, she bagged 2 bronze medals in the Asian Championship, Philippines, and International Open, Thailand. In 2012, Devi claimed the silver medal for the team event and a bronze medal for the individual event at the Commonwealth Championship held in New Jersey.

In 2017, Bhavani clinched her second gold in the Tournoi Satellite WC Fencing Competition held in Iceland. She also won a silver medal in the next edition. In 2018, she became the first Indian fencer to win a gold medal in the Commonwealth Fencing Championship held in Canberra. In 2019, she won a silver medal in the Tournoi Satellite Fencing Competition held in Belgium. She was qualified to participate in the 2020 Tokyo Olympics. In 2021, she was ranked 42nd in the world with 37 points.

Her Zodiac sign is Virgo. In 2021, Bhavani was announced to be the Goodwill Ambassador of the World’s first Safety Lifestyle brand ‘MY’. Her net worth is estimated at $ 1.5 million.

Some Important Facts About Bhavani Devi

If you have Some more Important details about Fencer Bhavani Devi, Please comment below we will be updated soon.