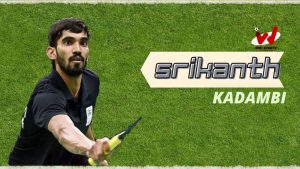 Srikanth was born in Ravulapalem, Andhra Pradesh on 7 February 1993 in a Telugu family of KVS Krishna and Radha Kidambi. He belongs to an agricultural family, where his father KVS Krishna is a farmer and a landlord and his mother Radha Kidambi is a housewife. He has an elder brother whose name is Nandagopal Kidambi who is also a badminton player. Srikanth was awarded the Padma Shri, India’s fourth-highest civilian award in 2018.

In April 2018, Kidambi moved to the top of the men’s singles rankings with 76895 points. He won the Indonesia Open Super Series Premier title after beating Japan’s Sakai in 2017. In the Thailand Open Grand Prix Gold event, he won the men’s title by beating the world ranking of no. 8 at that time and his favorite player Boonsak Ponsana.

His birthday is in the month of February 7, birth sign is Aquarius and hobbies is spending time with close friends and family.

Some Important Facts About Srikanth Kidambi

If you have Some more Important details about Badminton Player Srikanth Kidambi, Please comment below we will be updated soon.