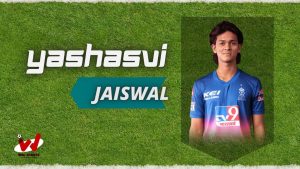 Yashasvi Jaiswal is the winner of Man of the tournament for his great performance in the Under-19 Cricket World Cup at an early age. He is a great youngster with a zeal to do everything. He plays for Mumbai in domestic cricket and for Rajasthan royals in the Indian premier league.

He is a left-handed opening batsman who bowls leg break googly occasionally. He has shown many spectacular performances so far.

Yashasvi was born on 28 December 2001 in Suriyawan, Bhadohi, Uttar Pradesh, India. At the age of ten he moved to Dadar, Mumbai, to receive his professional cricket training from Azad Maidan. He had no where to go when he shifted to Mumbai so he started working but his Talent was spotted by Jwala Singh who runs Cricket Academy in Santa Cruz.

He first came into limelight when he made an amazing all rounder record for his school, which was recognised by Limca book of Records.

Yashasvi was selected in Mumbai under 16 squad after he performed spectacularly in his school, he was later selected in India Under 19 squad. He was the highest run-scorer in the 2018 ACC Under-19 Asia Cup, which made India win. In 2020 he was named in the Indian Under 19 Cricket World Cup team where he hit a century against Pakistan.

Jaiswal’s father is an owner of the small hardware store, his mother is a homemaker. He was legally adopted by Jwala Singh who became his legal guardian.

Some Important Facts About Yashasvi Jaiswal

If you have Some more Important details about cricketer Yashasvi Jaiswal. Please comment below we will be updated soon.