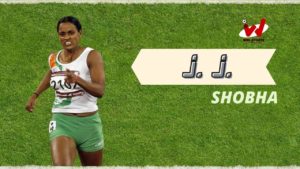 J. J. Shobha is an Indian professional track and field athlete hailing from Karnataka, India. She is a National record holder Heptathlon for acquiring 6211 points.

J.J. Shobha was born on 14th January 1978 in the small village of Pashupathilaal, Karnataka. She has a great interest in sports from a young age. She began pursuing her dream of becoming an athlete at the age of 11. She has won in many athletic competitions at the junior level.

Shobha began her athletic journey in 2002 at the Busan Asian Games. She won the bronze medal in the Heptathlon event. In the same year, she also brought home silver after competing in the Asian Championships held in Colombo, Sri Lanka. In 2003, she bagged a gold medal with 5884 points in the Afro-Asian Games held in Hyderabad, India. This victory put her in limelight among the international community. She also ranked first in the 2003 National Championship held in Bangalore, India. Shobha represented the South Central Railways.

The 2004 Olympic Games held in Athens, Greece, was a memorable event for Shobha and the viewers. Although she didn’t win a medal in the heptathlon event due to an injury, she ranked 11th out of 34 contestants and scored her career-high 6211 points. Her performance wins her the Arjuna Award.

In 2006. Shobha ranked 1st in the Long Jump event at the Nationals Championship held in New Delhi, India. In the same year, she won a bronze medal in Heptathlon at the Asian games held in Doha, Qatar. In 2007, she came in 1st for Heptathlon at the National Champions in Jamshedpur, India. She also clinched the silver medal in the 2007 Asian Athletics Championships held in Amman, Jordan. In 2009, Shobha ranked overall 29th in the Olympic Games held in Beijing, China.

Her Zodiac sign is Capricorn. She is currently employed as Head Clerk in the South Central Railways.

Some Important Facts About J.J. Shobha

If you have Some more Important details about Boxer J J Shobha, Please comment below we will be updated soon.