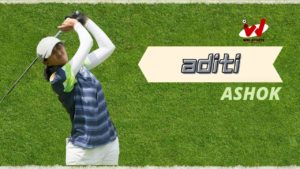 Aditi Ashok is an Indian professional golfer and Olympian. She is the first golfer to represent India in the Olympics.

Aditi Ashok was born on 29th March 1998 in Bengaluru, India. She began playing golf at the age of 5. Seeing her enthusiasm, her father enrolled her in the Karnataka Golf Association. Aditi won her first national title at the age of 9.

In 2010, Aditi made her debut at the Asia Pacific Invitation tournament and grabbed the title. In 2012 she won the championship at the National Junior Championship. Aditi won the titles in the 2013 and 2014 editions. In 2014, the young golfer played in the Asian Youth Games and Asian Games. In the following year, she won the title in the Ladies’ British Amateur Stroke Play Championship.

In the same year, she was the youngest player at the Rio Olympics. She finished 41st in the event. In the following year, Aditi ranked 8th at the Louis Suggs Rolex Rookie of the Year standings. She scored her career-best T6 result at the Volunteers of America LPGA Texas Classics in 2018. In 2019, she played at the CP Women’s Open. She was also placed second at the LET that year. In 2021, Aditi competed in the Tokyo Olympics and finished fourth in the final round.

“Goodbye Tokyo 👋🏽
Leaving with bittersweet memories. This is probably the most disheartened I have ever been after finishing 4th in a golf tournament. I tried my best till the very end but golf is like that sometimes. You don’t always get what you deserve, but you do get what you work for. So I will continue to work hard and chase my dreams“.

Some Important Facts About Aditi Ashok

If you have Some more Important details about golfer Aditi Ashok, Please comment below we will be updated soon.