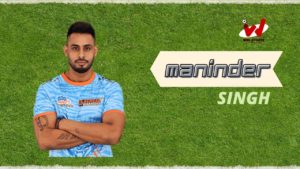 Maninder Singh is an Indian professional Kabaddi player, who plays for the Indian National Kabaddi Team and for Bengal Warriors in Vivo Pro Kabaddi League season 8 as a raider.

Kabaddi player Maninder Singh was born on 31st January 1990 in the Dasuya, Hoshiarpur district of Punjab. Hoshiarpur is the hometown of Maninder and Currently, he is living in Jalandhar. The information about his patents and family is not available right now. We will update very soon.

Maninder Singh cpleted his schooling from his Home town. Then he was gradueted from Khalsa College, Amritsar.

Maninder started his career in Kabaddi from his school days. Then due to his good performance in domestic competitions, Maninder was selected in the Under-19 team of his university, from where he started Kabaddi as a professional.

During the opening game, he outperformed his opponents and was one of the most successful raiders in the competition. Seeing his attacking style in raids, Hanumat Singh, a renowned Kabaddi coach from Jalandhar, decided to improve his game further.

Hanumat trained Maninder professionally and convinced him to choose Kabaddi as a professional career. Maninder had all the potential to represent the Indian team, and with this Maninder Singh started playing Club Kabaddi in Jalandhar and impressed everyone with his skills.

In 2017, Maninder’s dream of representing the Indian Kabaddi team came true as he got an opportunity to represent India in the 2017 Asian Kabaddi Championship. India won the gold medal in that tournament.

In season 5, Maninder faced this bad phase of life positively, did well again in domestic games and returned to PKL in Season 5 with the same aggressive style and flair.

Bengal Warior picked him for PKL Seaon 5. He claimed 190 raid points in the brilliant comeback season for Bengal warriors. Due to His outstandin performance, He was retained by Bengal Warriors in season for next all season of PKL.

In Season 6, He holds the record for the fastest raider who scored 400 and 500 raid points. Maninder Singh did not disappoint his franchise and became the leading raider for Bengal Warriors in Season 6 with 206 points. It was also his career best performance in 22 matches.

OP Surjeet Singh, who has been captaining for the last 2 seasons, was not ratained by Benagal Warriors and in 2019 season 7 Maninder got a chance to become the captain of Bengal. In a match of season 7 of PKL, he became the seacond quickest raider to reach 600 points in 68 matches after Pardeep Narwal. He took his team to the playoffs but unfortunately he got injured again.

Despite his absence in the team, Bengal Warriors won their maiden PKL title by defeating Dabang Delhi. Maninder went from his career best performance by just 2 points due to injury. However, he gave his best performance against the Jaipur Pink Panthers when he scored 19 raid points from 24 raids in the Warriors’ 41–40 win, which propelled his team into the playoffs. He scored 10.25 average points per game throughout the season.

Maninder’s Zodiac sign is Capricorn. His net worth is estimated 1.60 crore. Maninder is married but his wife name and family information is not available on internet. Whenever, he will provide information about his family, we will update soon.

Some Important Facts About Maninder Singh

If you have Some more Important details about Kabaddi player Maninder Singh, Please comment below we will be updated soon.