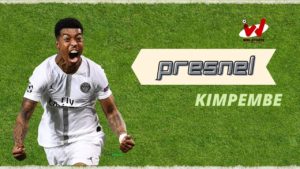 Presnel Kimpembe s a French-Congolese Professional Football player who plays for the Ligue 1 Club Paris Saint Germain and the French National team. He plays the position of center back.

Presnel was born on 13th August 1995 to a Congolese father and Haitian mother. At the age of 7, he began playing for his hometown club AS Eragny. After 3 years, he was scouted by PSG and was placed in the youth academy.

In 2013, he was promoted to the PSG B team and made his professional debut 2013. He played in various matches for the club till 2017. In 2017, he made his UEFA Champions League debut in a winning match against Barcelona. In 2018, Presnel was selected in the 23 men French squad for the FIFA World Cup, Russia. The team won the cup after the final match against Denmark. In 2019, he made his first goal for the team in a match against Manchester United. In 2021, he was called up for the 26 men French squad for the European Championships.

Presale is married to Sarah Kimpembe, a professional model. The couple has two sons, Kayis and Kahil. The center-back has amassed a net worth figure of $5 million. In 2020, Presnel started his streetwear collection called PK3 Paris.

Some Important facts About Presnel Kimpembe

If you have Some more Important details about Football Player Presnel Kimpembe, Please comment below we will be updated soon.