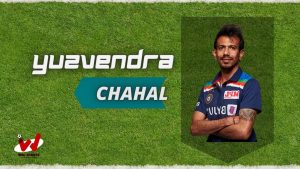 Yuzvendra Chahal is a mind-blowing Indian leg-break bowler who has previously represented India in the international chess championship. He plays for Haryana in domestic cricket and for Royal Challengers Bangalore.

This amazing bowler has played both international Twenty20 cricket and ODIs for India and made India proud of his performance.

Yuzvendra Chahal was born on 23 July 1990 in Jind, Haryana, India. He is an amazing bowler who as a child aged 7, dreamt of becoming a chess player but due to lack of funds, he left chess. His name is listed in the World Chess Federation office.

Chahal made his first class debut at the young age of 19, he has not played many first class matches but he has left his mark in the few matches that he has played. He first came into limelight for his excellent performance in Under-19 Cooch Behar trophy, he became the lead wicket taker in the match and also scored good amounts of runs.

He was picked up by Mumbai Indians in 2011. But during his time with Mumbai, he didn’t perform well. He was later roped in by Royal Challengers Bangalore in 2014, playing for them changed his fortune forever. He earned the man of match award in 2014 against Delhi Daredevils.

He made his One day International day debut against Zimbabwe on 11 June 2016, he performed exceptionally well. In his next match he performed with even more vigor and led his team to a grand victory, and he got his first international man of match.

On February 1 2017, he became the first bowler for India to take a five wicket haul in a Twenty20 international against England. He was the only bowler to take so many wickets in 2017. On 18 January he took his second Twenty20 international five wicket haul. In November 2019 he became the third bowler to give a spectacular performance by taking 50 wickets against Bangladesh.

In 2020 he became the first concussion substitute to win the man of the match.

Chahal’s father is an advocate, and his mother is a homemaker. He was born in a village but later his family shifted to Jind. He married Dhanashree Verma, a youtuber and a dentist, last year.

Some Important Facts About Yuzvendra Chahal

If you have Some more Important details about cricketer Yuzvendra Chahal. Please comment below we will be updated soon.