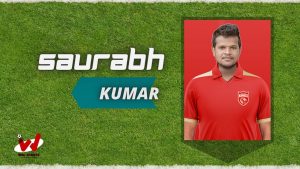 Saurabh Kumar is an Indian cricketer who bats left-handed and bowls slow left-arm orthodox. He plays for Uttar Pradesh in domestic cricket and will play for Kings XI Punjab in this year’s Indian premier league.

Saurabh Kumar is an Indian player who was born on 1st May 1993. Saurabh belongs to a middle-class family hailing from Uttar Pradesh. He was once employed in the Indian Air force wing and left the services to start his career as a cricketer.

Though he didn’t get enough limelight despite being part of the IPL team and also didn’t get a single match to play. But his hard work and determination to play good cricket in his life made him what he is today.

His 51 wickets haul for the Uttar Pradesh team made headlines. His journey from being a serviceman to a world-class cricketer is just fabulous.

Kumar debuted first with T20 on 8th January 2016. This match was played for Syed Mushtaq Ali Trophy. He became a leading wicket-taker from the day he set foot on the cricket ground. He plays for Uttar Pradesh’s domestic cricket team and took 23 wickets in just four matches during the Ranji Trophy tournament.

Rising Pune Supergiants bought Kumar for a base price of 10 lakh in February 2017. After that, he continued his cricket journey by playing for team India blue between the year 2018-19. This match took place in July 2018 for the Duleep trophy. This time also he amazed his fans as well as selectors by taking nineteen wickets in only three matches.

During the Ranji trophy that was in December 2018, he played against Haryana. On another eventful day, he took fourteen wickets for the team and also batted 65 runs. These figures were declared second-best for a young bowler from Uttar Pradesh in Ranji Trophy.

He is the leading wicket-taker for the team and later played in the group matches for the Ranji Trophy tournament. His overall wickets crossed 50 in only nine matches and that is what we called a world-class player. His performance became the talk of the town as he finished the tournament with 51 wickets in ten matches.

After this tournament Saurabh became part of India’s Blue squad  for the Duleep trophy in 2019-20.

At the start of the new year 2021, he was named as the five best net bowlers to play in India’s Test squad. He was set to play against England.  He utilized this golden chance and was selected to play for Kings XI Punjab in this year’s IPL league.

Some Important Facts About Saurabh Kumar

If you have Some more Important details about cricketer Saurabh Kumar, Please comment below we will be updated soon.