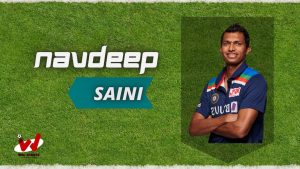 Navdeep Saini is an amazing Indian bowler who occasionally bats right-handed. He plays for Delhi in domestic cricket and for Royal Challengers Bangalore in the Indian premier league.

He has shown some talented bowling tactics till now that have garnered much-needed attention to his side.

Navdeep Saini’s full name is Navdeep Amarjeet Saini and was born on 23 November 1992. Navdeep belongs to the state of Punjab. He was born and brought up in a small town called Karnal. His father is a middle-class man who is a government employee and works as a driver.  His grandfather was an activist who took part in the freedom struggle and was an essential part of Netaji Subhash Chandra Bose’s army post-independence.

After his best performance in these matches, he was bidden by Delhi Daredevils in 2017 at the base of ten lakh. Next year he was purchased by Royal Challengers Bangalore in 2018 for a whopping price of 3 crores.

And still he is continuing to be a part of Royal Challengers Bangalore team.

While playing for Delhi he showed his exceptional skills and became a leading wicket-taker during the Ranji trophy. His record was 34 wickets in eight matches. Then next year he played for Vijay Hazare Trophy. In that series, he bowled sixteen times in just eight matches. 2018 was a fruitful year for him as he was selected for India’s C’s squad between 2018-19.  His phenomenal performance grabbed eyeballs from the selectors as well as fans.

He was now a team member for the Test squad in June 2018. This match was against Afghanistan as he was a replacement player for injured Mohammad Shami.

For the world cup in 2019 he was named as a stand-by player.

Navdeep was named as a player for ODI and T20 against West Indies. T20 was his debut on the international pitch. He took three wickets in just four overs which was marvelous for a first-time debut player. He bowled Nicholas Pooran and Shimron Hetmyer in two consecutive overs.

The last wicket was a maiden wicket that dismissed Kieron Pollard. His bowling won him a man-of-the-match award.

He then took part in a test match against New Zealand which took place in February 2020. And for the second consecutive year he was part of the cricket team. Next year he played against Australia.

But unfortunately, he couldn’t play this series due to some injury. With his efforts and hard work, he made a comeback against Australia next year. This year that is 7th January 2021 he clean bowled his fellow debutant Will Pucovski.

Navdeep’s father is a government driver, his mother is a homemaker. He has an elder brother named Mandeep Singh Saini.

Some Important Facts About Navdeep Saini

If you have Some more Important details about cricketer Navdeep Saini. Please comment below we will be updated soon.