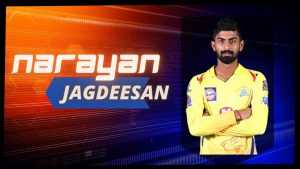 Narayan Jagadeesan is an Indian wicket-keeper who debuted in a first-class match for the Tamil Nadu cricket team in 2016-17 on 27 October 2016. He won the man of the match in the same match. Jagadeesan debuted in the T20 cricket world for the Tamil Nadu cricket team in the 2016-17 Interstate Twenty20 tournament on 30 January 2017. He made his List A debut for Vijay Hazare Trophy on 25 February 2017.

In January 2018 he was bought by Chennai Super Kings, but Jagadeesan made his debut in 2020 against Royal Challengers Bangalore.

Narayan Jagadeesan was born on 24 December 1995, in Coimbatore, Tamil Nadu. His father Ranjan Narayan is a retired wicket-keeper batsman, who acted as an inspiration to Narayan Jagadeesan. His mother’s name is Ganga Jayashree. He has an elder sister named Sarada Narayan.

He started playing cricket at a young age under his father’s guidance and support.

Jagadeesan started playing at the age of seven, then later his father enrolled him in Sri Ramakrishna Cricket Trust Academy (SRCTA) where he was under the guidance of A.G Gurusamy. He got selected in district under13 at the age of 9, later he got selected in the state under 13, under 14, under 16, under 19, an unusual thing is he was a captain in all of these teams.

He debuted in first-class cricket with the Ranji Trophy on October 26, 2016 in a match against Madhya Pradesh. He became the man of the match for this match.

Jagadeesan made his T20 debut in a match against Hyderabad on January 30, 2017. Later in the year, he made List A debut in Vijay Hazare Trophy by playing against Uttar Pradesh.

Narayan was bought by Chennai Super Kings in IPL auctions of the year 2018, but he started his IPL career in 2020 in a match against Royal Challengers Bangalore.

Narayan Jagadeesan is a commerce graduate, who has been playing cricket since an early age of seven. His father is an Indian cricketer and was his childhood inspiration.

Some Known Facts About Narayan Jagadeesan

If you have Some more Important details about cricketer Narayan Jagdeesan. Please comment below we will updated soon.