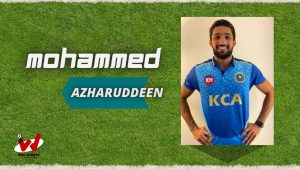 Mohammed Azharuddeen is a rising star who has shown some incredible performances till now. If nurtured properly Azharudeen has chances of showing beautiful colors.

He is a wicket-keeper who bats right-handed. He shocked people by his century and hopes to continue playing like that in the future.

Mohammad Azharudeen was born on 22 March 1994 in Thalangara, Kasaragod, India. He was born at the same time when Mohammad Azharuddin was playing for India, so his brother named him according to his name.

Azharudeen made first class debut on 15 November 2015, for Kerala. He made his List A debut on 10 December 2015, in Vijay Hazare Trophy. He performed exceptionally well in his debut matches. His Twenty20 debut was in Syed Mushtaq Ali Trophy on 2 January 2016.

In August 2018, he was among the three players who were suspended for showing disapproval of Kerala captain Sachin Baby. On 13 January 2021 he became the first batsman to score a century for Kerala in T20 match. His century became the second fastest in Syed Mushtaq Ali Trophy and joint third fastest by Indian batsman.

In 2021 he was bought by Royal Challengers Bangalore in IPL auctions.

Azharudeen’s father’s name is MK Boidu, his mother name is Nafeesa. He has an elder brother Kamrudeen.

Some Important Facts About Mohammed Azharuddeen

If you have Some more Important details about cricketer Mohammed Azharuddeen, Please comment below we will be updated soon.