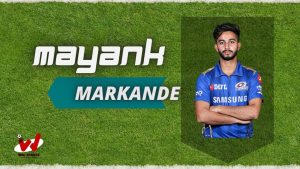 Mayank is an amazing Indian bowler whose local tricks can even bowl out the master of batting. He has shown some amazing shots till now and amazed all the spectators. His amazing skills landed him his international debut that many only dreams of.

He made his List A and first-class debut for Punjab in 2018. Although both times his team lost he caught people’s eyes.

Mayank was born on 11 November,1997 in Bathinda, Punjab, India. He started playing cricket at the age of seven and initially he started as a medium paced bowler but seeing his small frame his coach suggested him to become a spin bowler.

He joined NICS academy and started training under Mahesh Singh. His coaches Bali and Sodhi explained why they recommended him to play spin because his fitness level was not suitable for fast bowler.

He has performed well with both bat and ball and showed some fascinating performances. His noteworthy performance leads to his selection by Mumbai in the Indian premier league in 2018.

He made his T20I debut for India against Australia on 24 February 2019. India lost the game and he was not able to get any wicket.

Mayank’s father Vikram Sharma is a government employee and his mother Sandeepa Sharma is owns a boutique.

Some Important Facts About Mayank Markande

If you have Some more Important details about cricketer Mayank Markande. Please comment below we will be updated soon.