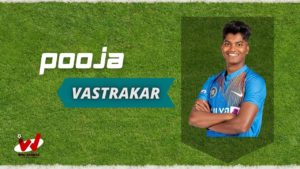 Pooja Vastrakar is an Indian cricketer and a member of the Indian Women’s National cricket team. She is a Right-arm medium-fast bowler for her team.

Pooja was born on 25th September 1999 in Madhya Pradesh, India. Her father is a retired employee of Bharat Sanchar Nigam Limited. Her mother passed away when she was ten years old. As a young girl, Pooja used to play cricket near her colony with the neighborhood boys. She then began training at the stadium with Ashutosh Shrivastava.

In 2013, Pooja was named to the Madhya Pradesh team and made her debut at the Twenty20 match against Odisha. In 2014, she was a part of the India Green Women Squad. In 2018, Pooja was selected to the Senior Women Cricket Team and made her international debut in an ODI match against South Africa. In the same year, she also played for the team at the Women’s Twenty20 International cricket against South Africa.

She was also part of the squad that played in the 20118 ICC Women’s World Twenty20 tournament, West Indies. In 2020, Pooja was named to the India Squad for ICC Women’s T20 World Cup, Australia. In 2021, she got selected to the Indian Test squad for their one-off match against the England team. This was also the year that Pooja made her official Test debut.

Pooja’s Zodiac sign is Virgo. Her net worth is estimated to be $1 million. She is managed by Fair Play Sports.

Some Important Facts About Pooja Vastrakar

If you have Some more Important details about cricketer Pooja Vastrakar. Please comment below we will be updated soon.