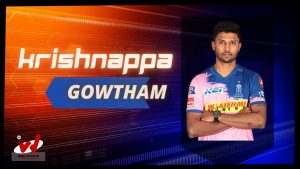 Krishnappa Gowtham is a hard-working youngster who belongs to Bangalore, Karnataka. He is an Indian all-rounder cricketer. He made his first-class debut with the Zonal Twenty20 tournament where he became the highest wicket-taker. He played for Karnataka in Ranji Trophy 2012. He played exceptionally in the 2016-17 Ranji trophy where he picked up five wickets haul for two back-to-back matches.

He became the most expensive uncapped player in the history of Indian premier league. He was picked up by Chennai Super Kings for 9.25 crore after having a bidding fight with Sunrisers Hyderabad and Mumbai Indians.

Krishnappa was born on 20 October 1988 in Bangalore, Karnataka, India. He never wanted to become a cricketer as a child, he was a part of NCC Air Wing camp and dreamt of becoming an AirForce pilot.

Although this dream didn’t last long as he saw his friends playing cricket, he got fascinated by the equipment and changed his goal.

He made his List A debut against Jharkhand, in February 2017 in Vijay Hazare Trophy.

On Day 10 June 2021, BCCI announced India’s 19 men’s squad for ODI & T20I series against Sri Lanka, In this, Indian Team Squad Krishnappa was selected. But he was not selected in the first two ODI matches of the Indian team but in the end, he played the last match of the ODI series. He made his One Day International debut on July 23, 2021, against Sri Lanka, In his debut match, he took 1 wicket in 8 over and but he bowled very well.

In IPL 2021 auction he was bought by Chennai Super Kings for a whopping Rs. 9.25 crore.

He is a huge fan of Harbajan Singh. He married Archana Sundar in 2019.

Some Important Facts About Krishnappa Gowtham

If you have Some more Important details about cricketer Krishnappa Gowtham. Please comment below we will be updated soon.