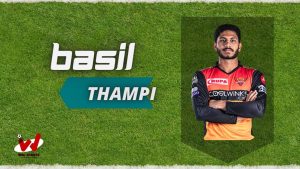 Basil Thampi is an amazing Indian bowler who has performed significantly and left his mark in various forms of cricket.Thampi is a right arm fast bowler and occasionally bats right handedly.

He plays for Kerala in domestic cricket and for Sunrisers Hyderabad in Indian premier league. He debuted in first class cricket in 2015.

Thampi was born on 11 September 1993, in Ernakulam, Kerala, India. He initially wanted to quit cricket as soon as he completed his schooling and take a job in the Gulf. However, his well wisher and friend told him the advantages of being a cricketer.

Thampi debuted for first class cricket on 6 February 2015, in Ranji trophy for Kerala. His great performance led to his selection in February 2017 by Gujarat Lions, for a high price of INR 85 lakhs. He received the 2017 emerging player award in Indian premier league.

In 2018 he was selected in Indian Blue squad for the Duleep trophy. He was roped in by Sunrisers Hyderabad in 2018 IPL auction.

He was named in the 2017 test series against Australia, and was a net bowler for the team. In 2017 he was named in Twenty20 international matches against Sri Lanka but did not get to play.

Basil’s Father’s name is M.M Thampi, his mother is Lizzy Thampi. He has a sister named Sinu Thampi.

Some Important Facts About Basil Thampi

If you have Some more Important details about cricketer Basil Thampi. Please comment below we will be updated soon.