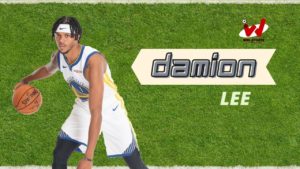 Damion Lee is an American Professional Basketball player who plays Shooting Guard for the Golden State Warriors of the NBA.

Damion Lee was born on 21st October 1992 to Dean Lee and Michelle Riddick. He studied at Calvert Hall College High School. He played for the school team and was named Second Team Baltimore Sun All-Metro and First Team All- Baltimore Catholic League selection. He then transferred to St. Thomas Moore High School and played in the 2010-11 season. At the end of the season, he became a First Team All-New England Preparatory School Athletic Council selection and led his team to the National Prep School Championship.

In 2011, Damion joined Drexel University and played for the Drexel Dragons men’s Basketball team. In 2011-12, he average 12 points and 4.4 rebounds. He was named the Colonial Athletic Association (CAA) Rookie of the Year and the CAA All-Tournament Team. In the 2012-13 season, Lee was named to the Second Team All-CAA after leading the team to third position.

In 2015, after the season Damion was awarded CAA All-Conference First Team, CAA All-Defensive Team, and CAA All-Academic Team. In the same year, he transferred to the University of Louisville and played in the Louisville Cardinals during his final year. In 2016, he was named to the 35-man midseason watchlist for the Naismith Trophy. During the season he was named the 13th best team in the country. They ended the season as the #16 ranked team.

In 2016, Damion Lee joined the Miami Heat for the NBA Summer League. In September, he signed with the Boston Celtics. He was then traded to Maine Red Claws of the NBA Development League. In 2017, Lee was drafted to the Santa Cruz Warriors of the NBA G League. In 2018, he signed a contract with the Atlanta Hawks and played for the team for the remaining season. In 2018, Lee signed a contract with Golden State Warriors.

In the same year, Lee was selected to the United States National Team for the 2019 FIBA Basketball World Cup. In the 2019-20 season, the Warrior recorded a double-double with a career-high 23 points in his win over New Orleans Pelicans. In 2020, Lee signed a contract with the Warriors. In 2020-21 Lee scored the game-winning three-pointer in his match against Chicago Bulls.

His Zodiac sign is Libra. Mychal holds a net worth of ‎$1 million. Damion was married to Sydel Curry-Lee, daughter of Dell Curry and younger sister of Stephen Curry.

Some Important facts About Damion Lee

If you have Some more Important details about Basketball Player Damion Lee, Please comment below we will be updated soon.