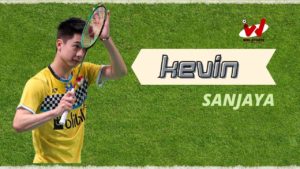 Kevin Sanjaya Sukamuljo is a professional Indonesian Badminton Player who is currently ranked world no. 1 in Men’s doubles. He plays for PB Djarum and has been a member since 2007.

Kevin was born on 2nd August 1995 in Indonesia to Niawiti and Sugiarto Sukamuljo. He became interested in playing badminton after watch his uncle Alvent Yulianto the former double no. play. Recognizing his passion, his uncle began training him.

In 2006, Kevin auditioned at the PB Djarum but failed. However, the young shuttler did not give up and cleared the audition the following year.

After joining PB Djarum, Kevin competed in singles only to be defeated match after match. He then trained for doubles and improved his skills.

In 2010, he won the Kalimantan and the Candra Wijaya Men’s doubles championship. In the following year, he represented Indonesia at the ASEAN School Game held in Singapore. In the same year, he reached the finals of the Singapore International Series Tournament.

He also won the Grand Prix doubles titles at the New Zealand Open. Kevin won his third title at Bulgarian International. In 2015, he reached the quarter-finals of All England. The Indonesian shuttler competed in the Sudirman Cup and won a bronze medal.

In 2016, Kevin and his partner won the Malaysia Masters. In the same year, he competed in the Thomas Cup.

He also won the China Open and the Australian Open. In 2017, Kevin made it to the quarter-finals at the World Championship, Glasglow.

In 2018, he won the Japan Open and gold medal in the Asian Games, Kevin also won the China Open In 2020, Kevin bagged the silver medal in the Yonex All England Open 2020.

He also won the title in the Indonesian Masters. In 2021, he made his comeback at the All England Open.

His Zodiac sign is Leo. Kevin Sanjaya Sukamuljo’s estimated net worth is $1 million.

If you have Some more Important details about Badminton Player Kevin Sanjaya Sukamuljo, Please comment below we will be updated soon.