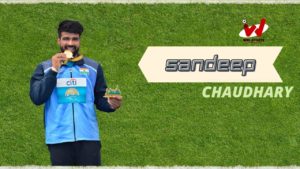 Sandeep Chaudhary is an Indian track and field para-athlete who competes in the javelin throw in the F44 category.

Sandeep Chaudhary was born on 10th April 1996 in Rajasthan, India. As a young boy, he was very good at sports. Sandeep’s father was a Special Forces Commando officer working under the command of the Prime Minister of India. His family also encouraged him to pursue a career in the field of sports. Growing up, Sandeep played badminton and volleyball. When he was 12 years old, Sandeep injured his hip and suffered an internal infection. This resulted in the stunted growth of his legs. In 2013, he decided to professionally compete in javelin throw.

In 2014, the athlete made his professional debut at the Asian Games. In 2016, Sandeep claimed the gold medal at the FAZZA World Para-Athletic Championship in Dubai. In the same year, he bagged his second gold medal at the Berlin Open, Germany. This performance brought Sandeep to the limelight and scored him a bench at the Rio Paralympics. He ranked fourth in the Paralympics that year. In 2017, Sandeep finished fifth in the World Para Athletics Championships, London. In 2018, he bagged the silver medal at the Handisport Open. In 2019, Sandeep claimed the World Championship title with a career-high 66.18 m throw. In the same year, he also won double golds in World Para Athletics Grand Prix and Italian Grand Prix. His performance qualified him for the Tokyo Paralympics 2020.

Sandeep Chaudhary Zodiac sign is Libra. His net worth is estimated to be $1 million.

Some Important Facts About Sandeep Chaudhary

If you have Some more Important details about Athlete Sandeep Chaudhary, Please comment below we will be updated soon.