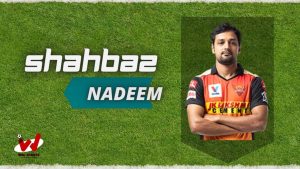 Shahbaz Nadeem is an incredible Indian cricketer who plays for Jharkhand in domestic cricket and for Sunrisers Hyderabad in Indian premier league. He is a slow left arm orthodox bowler who occasionally bats right handed.

He has played for Bihar’s under 14 and India’s Under-19, now he plays for Jharkhand. Nadeem has performed exceptionally in all the matches he has played for.

Shahbaz Nadeem was born on August 12, 1989 in Muzaffarpur, Bihar, India. He stayed away from his home in Siwandih, Bokaro Steel City to train in professional Cricket in Bokaro training hostel. He started playing early and has been showing some incredible performances.

Nadeem’s debut was anticipated long before he actually made his debut. He first came into limelight when he started playing for Jharkhand in under-15 against Sikkim where he scored a nine wicket haul. In the Under-19 team he played only one match for under-19 World Cup.

In 2012, he was selected in IPL auctions, with impressive performance in the domestic formats. He finished consecutive years and took the most number of wickets, in 2015-16 & 2016-17 Ranji Trophy. He was the leading wicket taker in 2017-18 Ranji trophy.

In January 2018, he was brought up by Delhi Daredevils. He was named in the squad for India Red in 2018-19 Duleep trophy. In September he made a new list A record in Vijay Hazare Trophy taking 8 wickets for giving just 10 runs. He also took a hat-trick while making the record.

In January 2021, he was named the five in India’s test squad for their series against England.

His father is a police officer in Bihar, his mother is a homemaker. He has a brother who has formerly played cricket as well.

Some Important Facts About Shahbaz Nadeem

If you have Some more Important details about cricketer Shahbaz Nadeem. Please comment below we will be updated soon.