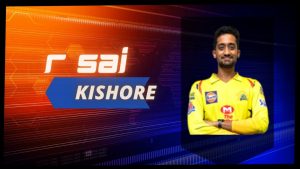 Ravi Srinivasan Sai Kishore is a hard-working youngster, he was the lead wicket taker for Tamil Nadu in the Ranji trophy. He was roped in by Chennai Super Kings in IPL auctions.

Ravi Srinivasan was born on 6 November 1996, in Madipakkam, Tamil Nadu.
He belongs to the place where the famous cricketer Vijay Shankar hails from.

He completed from  Vyasa Vidyalaya Matriculation Higher Secondary School,
and he is a bachelor of computer applications. He pursued his master’s in
different courses, he became a master’s in business administration in the
analysis.

R Sai Kishore started playing cricket during his school days, he was in his school
cricket team. He joined engineering school but dropped out of it as he knew he
was not on the right path. Ravi Srinivasan Sai Kishore joined the under 19
teams of his state and they won both Vijay Hazare Trophy and Deodhar titles in
2016-17.

He debuted in first-class for the Tamil Nadu cricket team in 2016-17 but he has
played and won the Ranji Trophy many times.

R Sai Kishore was roped in by Chennai Super Kings in 2020 at the 2020 IPL auctions and paid INR 20 lakhs, but he didn’t play any match.

If you have Some more Important details about cricketer Ravi Srinivasan Sai Kishore. Please comment below we will be updated soon.