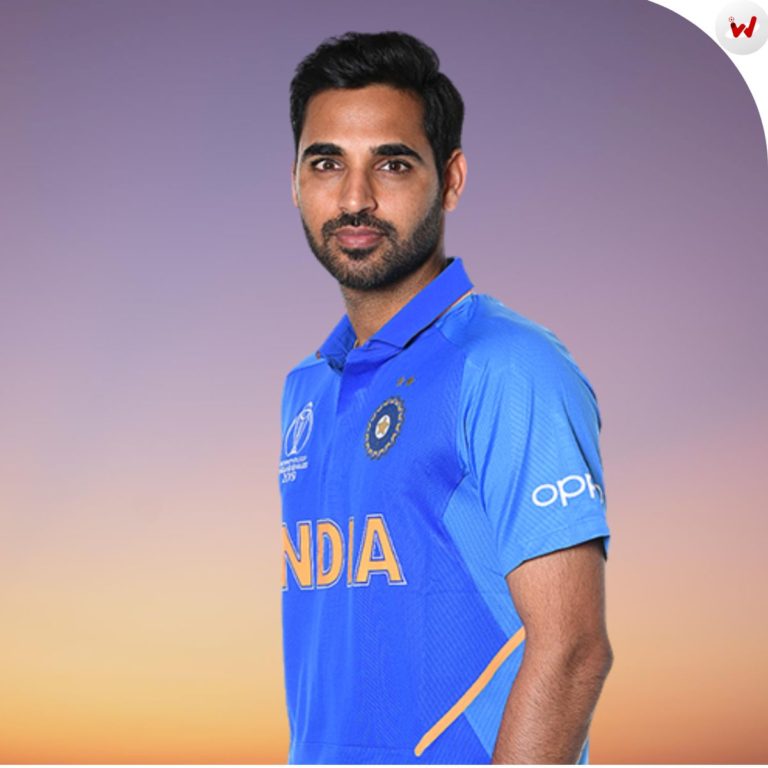 Bhuvneshwar Kumar is an Indian cricketer who lives in Luharli village, Bulandshahr district, Uttar Pradesh, India. Kumar is an Bowler who plays as right-arm fast medium. He is one of the best swing bowlers in the world. In domestic matches, he plays for Uttar Pradesh and in Indian Premier League, he plays for Sunrises Hyderabad.

Bhuvneshwar Kumar was born on 5 February 1990, at Meerut, Uttar Pradesh. His father name is Kiran Pal Singh who is an Sub-inspector in Uttar Pradesh Police, his name is mother Indresh Singh who is an house wife and his Sister name is Rekha Adhana. Rekha encourage him to became cricketer and she forced with to join his first coaching center at age of 13.

Kumar first started playing First-Class format for Uttar Pradesh. He made his debut in First-Class against Bengal at Kolkata on 17-19 December 2007 in Ranji Trophy 2008-09. In his debut match of First-Class, he took his first wicket Anustup Majumdar and that match he took 3 wickets in 2 innings. From 2007-18, Kumar has took 218 wickets in 123 innings with 12 times 5 haul wickets and 9 times 4 haul wickets and also scored 2433 runs in First-Class matches. After the debut of First-Class in next year he made his debut in list A format against Rajasthan at Kanpur on 26 February 2008. In list A, Kumar took his first wicket of Rajesh Bishnoi. From 2008-January 2022, he has played 168 matches and took 208 wickets with best bowling figure of 5/42 and also scored 1198 runs in 92 innings with highest score 72. Later on in 2009, he made his debut in T-20 tournament for Royal Challenges Bangalore against Delhi Daredevils in IPL on 17 October 2009.

Kumar was bought by Royal challengers Bangalore (RCB) in Indian Premier League (IPL) in 2009, after seeing his performance in Ranji season 2008-09. He made his IPL debut for Royal Challenges Bangalore against Delhi Daredevils in IPL on 17 October 2009. In 2011 IPL season, Kumar was released by RCB and was signed with Pune Warriors India, but in 2013, the team was dissolved. After that in 2014 IPL season, he was signed with Sunrises Hyderabad at price of Rs.4.25crores. In that year, Kumar played 14 matches and took 20 wickets. Later on in 2016 IPL season, he won the Purple Cap, while taking 23 wickets and was the most wickets taker in that season. After seeing his performance he was selected as vice-captain in 2018 season. In 2022 IPL season, Kumar was released by Sunrises Hyderabad in Indian Premier League mega-auction and was bought by the sunrises Hyderabad at price of Rs.4.50crore.

Kumar was selected for Test series against England in 2014, in that test series, he took his career-best Test match bowling figure 6/82 at Lord’s stadium and he was named of the Player of the series. After that, Kumar was selected for T-20 series against South-Africa and took 5 haul wickets on 5 February 2018 at Johannesburg, South-Africa. On 12 January 2019, he was playing against Australia at Sydney and Kumar took his 100th wickets in ODI. After that, he was named in 2019 Cricket World Cup in April 2019, but he was ruled out of World Cup due to leg injury. In September 2019, Kumar was selected for India squad for 2021 ICC Men’s T-20 World Cup. On 8 September 2022, Kumar took 5 haul wickets with giving 4 runs in 4 overs against Afghanistan in 2022 Asia Cup.

Kumar has married with his longtime girlfriend Nupur Nagar on 23 November 2017. She is an Engineer by profession. The couple had blessed with baby girl on 24 November 2021.