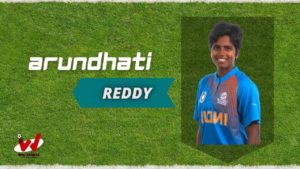 Arundhati Reddy is an Indian cricketer and a member of the Indian Women’s National cricket team. She is a Right-arm medium-fast bowler for her team.

Arundhati Reddy was born on 4th October 1997 in Hyderabad, India. Her mother was an ex-volleyball player. As a child, she received immense support from her family to play sports. Arundhati grew up playing cricket with her brother and his friends. She decided to pursue cricket as a career after watching India win the title at the T20 Championship, South Africa. Arundhati enrolled in Hyderabad Cricket Association to train professionally. Her performance landed her a spot on the U-19 team.

In 2018, Arundhati made her professional debut at the Women’s Twenty20 International cricket against Sri Lanka. In the same year, she got selected for India’s squad for the ICC Women’s World Twenty20 tournament, West Indies. Her performance in the tournament got her named by the people, ‘the next Jhulan Goswami.’

In 2020, Arundhati got named for the team to play at the T20 World Championship, Australia. She was one of the three players picked for the option of seam bowling. In 2021, she was named for India’s Senior Women squad for the Test One-off match against England where she displayed an all-around performance.

Arundhati’s Zodiac sign is Libra. Her net worth is estimated to be $1 million. She is employed with Southern Railways as a Junior Clerk.

Some Important Facts About Arundhati Reddy

If you have Some more Important details about cricketer Arundhati Reddy. Please comment below we will be updated soon.