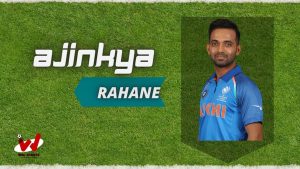 Ajinkya Rahane is an Indian batsman who plays for Mumbai in domestic cricket and for Rajasthan royals in the Indian premier league. He has shown amazing performance so far, his scorecard is quite an exemplary one.

Ajinkya Rahane was born on 6 June, 1988 in Ashwi KD village of Ahmednagar district, Maharashtra, India. He started playing at an early age of seven and he went to a small coaching centre as his parents can’t afford a better one. Former batsman Pravin Amre taught him professional cricket at the age of 17. He went to SV Joshi High School for his senior secondary education.

Ajinkya Rahane started playing cricket at an early age, and he made his U-19 debut for India against New Zealand at the age of 17. He made his first-class debut for Mumbai while playing against Karachi in 2007. His century in his debut match led to his selection in the Irani trophy. Rahane made his Ranji debut for the 2007-08 season. He performed exceptionally well in his debut and got selected to play for the Duleep trophy representing West Zone.

In the second Ranji season, he piled up 1000 runs, which helped Mumbai to win the 38th Ranji title. He increased his highest runs in the next Ranji Season. After scoring 1000 runs in one season, he scored 1000 runs in three consecutive seasons.

After sitting on the bench for a year, he was given a chance by Shikhar Dhawan’s injury in the England tour test. He impressed everyone on his first appearance by making a century, his century ensured that India won against England after 28 years.

Rahane made his ODI debut against England and scored a half century, but he failed to perform against Sri Lanka, Pakistan, West Indies. He kept going in and out for the ODI side but in 2015, he performed well in the World Cup in Australia. However he was not selected in the 2019 World Cup that went to England.

Rahane made his T20 international debut against England in August 2011. He scored half century in this match.

Ajinkya Rahane’s father is Madhukar Baburao Rahane, and his mother Sujata Rahane is a homemaker. He has two siblings, one brother, and a sister. Rahane married Radhika Dhopavkar in 2014.

Some important facts about Ajinkya Rahane-

If you have Some more Important details about cricketer Ajinkya Rahane, Please comment below we will be updated soon.