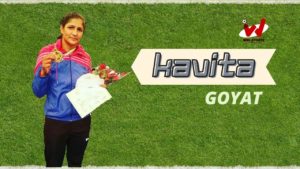 Kavita Goyat is an Indian woman boxer hailing from Haryana, India. She represents the country in the 69-79 kg fly.

Kavita was born on 15th August 1988, to Om Prakash and Sumitra Devi. Kavita was a studious child who was an active participant in playing games at school. She used to represent her college in boxing. She was coached by Raj Singh. She also won a gold medal in the 2008 Senior Women’s National Boxing Championship at St. John’s College, Agra.

In 2009, Kavita bagged the silver medal in the Federation Cup Women Boxing Championships at Erode. She won her second silver in the same year at the 10th Senior Women National Boxing Championship at JRD Tata Sports Complex, Jamshedpur. She also claimed her first international gold in the 2009 Hanoi Asian Indoor Games.

She settled for the bronze medal in the 2010 Asian games held in China. In 2010, Kavita won her first gold in the 11th Senior Women National Boxing Championship held in Kerala. She defended her title in the following year by winning gold in the 2011 edition held in Madhya Pradesh.

Her Zodiac sign is Leo. She is currently employed as Cop Inspector.

Some Important Facts About Kavita Goyat

If you have Some more Important details about Boxer Kavita Goyat, Please comment below we will be updated soon.